Stylish or ugly, don't let the TQ5’s unconventional casing distract you from the fact that with its 8-track integral sequencer and digital effects, this 4-operator FM expander packs a pretty powerful punch for the money. David Hughes reports from his ring-side seat.

Stylish or ugly, the TQ5's unconventional casing shouldn't distract you from the fact that with its 8-track integral sequencer and digital effects, this 4-operator FM expander packs a pretty powerful punch for the money. David Hughes reports from his ring-side seat. 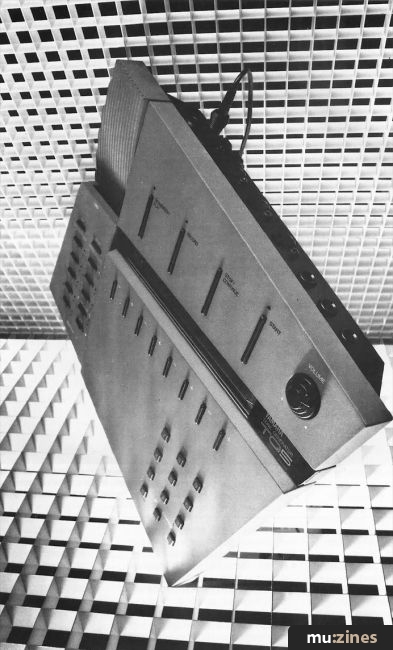 I suppose it had to happen eventually. In this age of designer jeans and designer stubble, we now have — the designer sequencer! Well, to call the TQ5 a 'sequencer' isn't really being fair. There is simply too much here to file it among these gadgets. If the modern concept of the audio workstation is a device which 'bundles' a collection of related equipment into a single package, then that's really what the TQ5 is. Yamaha chose to christen the device a 'tone generator' but then this isn't true either. Grouping the TQ5 under either of these sections is like saying Eddie Murphy has been known to tell the odd blue joke. Not a patch on reality...

Essentially, the TQ5 is an 8-track sequencer, 8-voice tone generator and digital effects unit built into a single package - which is pretty clever when you consider that the unit has a very small footprint of only 9" by 11.

The first thing you notice about the TQ5 is the truly awful design of the front panel. I would be lying if I said I liked it even one iota. The backlit display strip is set at an angle of about 15-20 degrees away from the horizontal, and looks ghastly. The volume pot is awkward to grip and closely resembles the top of a washing-up liquid bottle. I really can't understand why Yamaha would do this to a product, except possibly to appeal to those folk who would leave such a thing on a coffee table along with a copy of 'War And Peace' or 'Hollywood Wives'. It really is dreadfully tacky. I guess the designer was probably more used to designing soft furnishings or floral bedspreads.

The construction, superficially, appears to be pretty rugged. However, I doubt that it would survive the infamous Hughes 'drop' test in the way that my TX81Z and DX21 did. The grey plastic case is a little better than the 'chocolate box' approach beloved of the early computer manufacturers. But not much...

If you ignore the somewhat tacky appearance of the machine and concentrate on the more positive aspects of the TQ5, then it has to be said that the display must be one of this unit's stronger selling points. It's big and bright, and easy to read. My main reservation concerning the display is that it's slightly recessed into the main panel, which means you've really got to be sitting right on top of the thing before you can comfortably see it.

The remainder of the front panel is very sparsely populated and consists of a simple numeric keypad, a collection of thin, plastic multi-function pushbuttons, and a slot for a RAM card. On the rear of the instrument you have the usual MIDI In, Out and Thru sockets, a socket for the external (DC 15 volts) power supply (supplied), power on/off switch, and three ¼" audio output jacks: left/mono, right, and a stereo headphone socket.

Moving on to the guts of the machine, that is its sound and playability, I reckon that the TQ5 really does deserve to be grouped into the category of 'audio workstation'.

Firstly, the tone generator uses a simplified version of FM synthesis based around the tried-and-tested 4-operator model. The factory sounds themselves are pretty much par for the course as far as FM synthesis is concerned. They include the standard organ, strings and piano patches which every manufacturer assumes that the synth-buying public are ever eager to listen to, and a collection of fairly uninspired patches that - to me - sound like obvious targets for re-programming. There are, however, a number of genuinely good patches provided that add a lot to the character and sound of the machine. I spent some time attempting to reproduce a number of these sounds on my TX81Z expander, with varying degrees of success.

The 'front end' of the synthesizer section is pretty limited, however. Just how limited the machine actually is in terms of synthesizing power can be determined when you attempt to edit any of the preset sounds. There is no real control over the waveform generated, only three basic envelope generators which control the volume, the 'tone' (timbre), and the volume and tone together, and a few other parameters which affect how the TQ5 responds to MIDI aftertouch and other controller information. The 'tone' EG appears to be a kind of pseudo-filter, which I guess controls the depth of modulation applied to the carrier waveform in the actual FM process. Fair enough. It's simple and it works.

Rather than presenting you with a list of the actual parameters which make up the sound you intend to modify - which is the conventional approach adopted by most synthesizing beings in the western spiral arm of the galaxy - the TQ5 gives you a string of zeroes, which you then make either positive or negative using the front panel switches. In other words, instead of an absolute model of the sound, you have a deviation away from the 'current' sound. If I'd been used to this approach all of my life I probably wouldn't see anything amiss in this method, but as it stands, I found it harder to get the required sound than I might have done with the conventional technique. I would also have preferred a data entry slider. Although the front panel switches do auto-repeat, a slider is considerably faster and a lot less punishing on the unit than constantly tapping on the buttons!

On the whole, the TQ5 synthesizer section is very good - even though I did encounter problems along the way, which at first I interpreted as a duff internal battery. Later on, I realised that once the power is switched off, the TQ5 gets a very nasty dose of amnesia. Data is not retained once the power is removed. If you want to save your edits or sequencer song files then you must resort to a RAM card, which is an extra expense to consider. Battery-backed RAM is a very common feature these days - all of my other Yamaha gear has it! - and I found this a very serious omission.

The built-in sequencer is a more professional facet of the TQ5. There is room for a total of eight songs within the machine and each song can consist of eight tracks. Furthermore, each track can be as long as 999 measures and the maximum note allocation is about 10,000 - which isn't bad at all. Recording can be accomplished in either step-time or realtime, and any pattern can hold voice patch information as well as Note-On/Note-Off data.

The operation of the sequencer is, in most ways, quite conventional and therefore doesn't really need to be discussed in any great depth. All of the standard functions are present, as you might expect. Data can be copied between tracks, erased to make way for new data, or deleted to make a song shorter. However, you should understand that there are limitations. Since there are only a limited number of voices available - eight to be specific — you do tend to run out of notes quite quickly. The TQ5 does assist in the allocation of the available voices in that it allows you to set the distribution of the voices yourself, and there are a number of preset voice configurations to help you on your way.

"There is no real control over the waveform generated, only three basic envelope generators which control the volume, the 'tone' (timbre), and the volume and tone together..."

On now to the effects section. Again, this is quite conventional with nothing really hidden up its digital sleeve that is likely to cause the average musician to lose any precious beauty sleep. There are 10 effect types within the machine, which are all useful when applied correctly. They range from the standard hall and room reverb simulations to gated and reverse reverb effects, a stereo echo/delay, and a couple of distortion-type effects [good for those Jan Hammer 'guitar synth' impersonations - Ed.]. The only editable effect parameters available operate on the time constants and balance for the individual effects. Consequently, I wouldn't really expect to encounter too many problems here either. 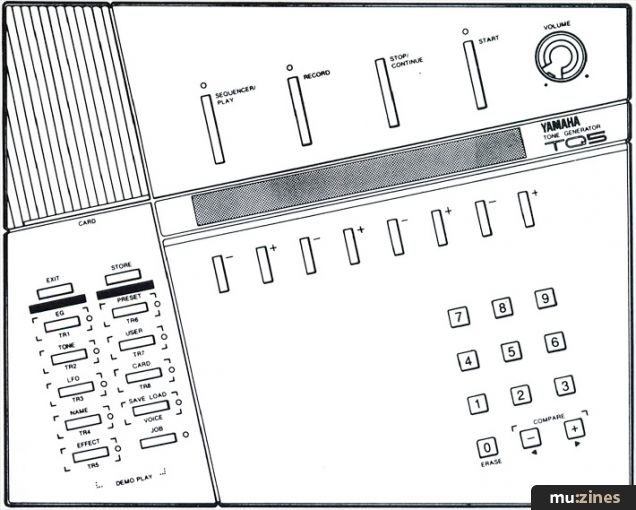 As I begin to sum up the various pros and cons of this machine, I can't help but attempt to stifle a bit of a yawn. Although the TQ5 is a sound machine with a good pedigree, I find myself asking a few simple questions. For one, just who is this instrument really aimed at? As a first guess I might suggest that it is aimed at the aspiring amateur who wants to build a small studio system but who lacks cash to purchase a bigger, more expensive system. As a second guess, it also appears to be aimed at those who want to move up from basic domestic keyboard instruments into the big, bad world of multitrack sequencers. Sadly, it also appears to be aimed fairly and squarely at the 'gadget freak' sector of the market; I can't think of any other reason for giving the TQ5 such an ugly case. But, since beauty is in the eye of the beholder, and there may well be a number of readers who actually find the appearance of this device quite pleasing, I won't let this aspect of the machine affect my final conclusion.

As an integrated system, the TQ5 is a good idea. It is a fine machine and does everything it sets out to do in a clear and reasonably uncluttered manner. But then perhaps that's the problem. There just isn't really anything that might be considered truly innovative about the TQ5. It is essentially just a re-packaging of existing ideas.

Having recently browsed around Yamaha's V50 workstation - another 4-operator FM synth with an integral sequencer and digital effects generator - I came to the conclusion that there isn't really much more you can do with this sort of product. It all works very well and is very attractive when compared with a fullblown computer-based system. But just ask yourself, is the world really crying out for another 4-operator multitimbral FM synthesizer?

This question shouldn't influence your view of the TQ5. My own personal feeling is that the TQ5 is a quality machine with a lot going for it. But if you feel that the TQ5 could be of use in your set-up, I would seriously suggest that you spend as much time as possible working through each section of the instrument before you part with any cash. 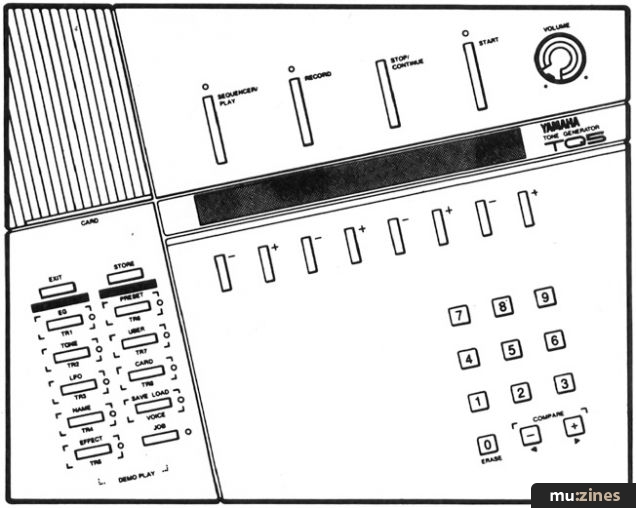 A Case for Quality Microphones 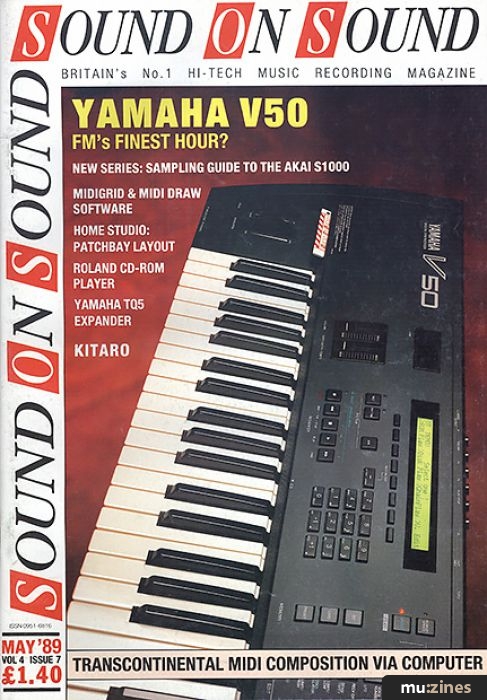 > A Case for Quality Microphon...