It sounds like a cheap TV ad, but this device puts an end to all known clicks and pops. Vic Lennard gives the latest development in noise elimination the Rice Krispies test.

If you thought CD was immune to the pops and scratches that afflict vinyl recordings, think again. If you think these noises are an unavoidable part of music, think De-Clicker.

FOR THOSE OF you not already in the know, CEDAR is an acronym for Computer Enhanced Digital Audio Restoration and the system is intended to remove noise and hiss from recordings without having any effect on the actual content of the recording (see feature MT, Nov '89). The system has particular relevance to old recordings on 78s, but as the removal of noise take place in the digital domain, the procedure is also highly pertinent to modern CD mastering where the odd PCM bit error can creep in, causing an annoying click.

For background information, there are four primary areas of noise. The first of these is broadband noise such as hiss, hum and whine, which is very difficult to remove as it is part of the signal. If viewed onscreen as a Fourier display, the waveform appears thicker; removal of this type of noise invariably changes the waveform and hence the sound you actually hear. The second type is thump noise, which is a click followed by a low frequency tail due to the movement of the record deck's tonearm. Thirdly, there is click noise which can be clearly seen as a spike of significant amplitude, extraneous to the waveform. Finally, there is crackle noise, which is also embedded in the waveform and, if viewed, appears as a jaggedness to the waveform. This differs from a click in that it has a small amplitude.

CEDAR Restoration deals with all of the above problems, but by batch processing, which means non-real time. Because of this, you're involved in a slow process of listening and deciding whether the process must be repeated. In real time, of course, you're hearing the result as a direct and instant consequence of making adjustments to the input signal.

Currently, neither thump nor crackle can be dealt with in real time, due to the lack of a miniature module-form Digital Signal Processor with enough power. However, the De-Clicker is CEDAR'S first venture into the rack-mountable world of little black, or in this case grey, boxes.

The De-Clicker resides in a 3U-high industrial rackmount box. It's actually a very small module but requires digital input and output modules as well as the power supply unit built into the rack. Two units can be used for stereo processing and A/D and D/A modules are also available.

In terms of controls and switches, it's difficult to think of an easier configuration; all the unit offers you is three switches and one control. The first switch is for left or right and is intended for stereo use with two modules. The second switch is for pre- or post-processing allowing you to compare the input to the processor with the output. Finally there is a module on/off switch for bypassing the De-Clicker because various different modules can be mounted within the mother case and not all would be needed at the same time.

The single control is for Threshold. This determines the level of scratch to be removed; a high setting removes only the largest clicks, while a low setting will take out fine ticks. The control itself takes the form of a thumbwheel which you are unlikely to need to change very often - a default value of around 40 tends to fit the bill. This may be changed to a liquid crystal display with increment/decrement buttons in the future.

The somewhat spartan appearance of the casing belies the power inside the De-Clicker. The input and output signals are resolved to 24 bits while the actual processing uses 32-bit resolution - part of the reason that what goes in comes out without timbral change. Maintaining data integrity is critical if sonic accuracy is to be preserved, especially as this is the particular strength of De-Clicker.

The software has been written by CEDAR while the hardware has been built by Harmonia Mundi Acustica (HMA) of Switzerland.

WORKING OUT WHEN a click has occurred is the easy part - the change in waveform amplitude is drastic and out of keeping with the otherwise smooth nature of the signal. How to then vanquish the click to the depths of oblivion is the question.

There are two methods which can be used in the removal of clicks. The first uses filters: if you know where the click occurs, you can use a very fast notch filter to remove the click, but this must also change the actual signal. Any filter will. If we're talking about one isolated click, then you probably won't hear a filter working, but if there are an average of ten scratches per second throughout a passage of music, the chances are you will. How about 2000 scratches per second?

"In terms of controls and switches, it's difficult to think of an easier configuration - all the unit offers you is three switches and one control."

The second method is to program a computer to remove the click from the waveform and to then rebuild the gap. The most elementary way of doing this is to visually examine the waveform and to pick out and mark individual clicks for the computer to treat. This is extremely time-consuming and consequently gives rise to the second way, which is to mark a number of scratches and program the computer to build a model based on these scratches. The remainder of the signal can then be examined and processed subject to this model. Again, this is very time-consuming. The next step is to automate the process with the computer searching out the scratches, making a model and then processing the signal subject to user-defined parameters. This is faster and more convenient than the other methods, but it has one very real problem - you need experience to know which parameters to change and the range of values to try.

This brings us to the final step which is where the De-Clicker is today. The input signal is analysed, at which point the computer uses Artificial Intelligence to build up a picture of how the signal should be - a kind of global view. It then compares the signal with this analysis and removes elements which do not conform - these will be clicks subject to the threshold setting on the front panel. The analysis is then used to replace the click with a complex signal path in keeping with the global evaluation previously carried out, after which the signal re-appears to the outside world with a delay of about 300 milliseconds due to the processing. The De-Clicker can handle up to 2500 scratches and clicks per second.

The removal of clicks in this manner doesn't alter the signal if the model is accurate. In fact, what tends to happen in practice is that the removal of clicks reveals the true nature of the original signal, and can sound as though audio enhancement is taking place. This is because there is often as much energy being produced by the clicks as by the original recording, which is consequently masked. Removing that mask returns the clarity. Of course, when dealing with early 78s - whose bandwidth was around 8kHz - there are likely to be distortions inherent in the original recording which cannot be removed by the De-Clicker.

THE OBVIOUS STARTING point is where CEDAR first made their name - 78s. Using a pair of Tascam DA30s (for their AD/DA converters) the signal from a 78 was passed into the De-Clicker and heard in all its clicking glory with pre-processing selected. Switching to post-processing simply left a level incidence of hiss which could have been removed by using any proprietary noise reduction unit. Impressive. Another 78 had a recording of solo violin where you could clearly hear the bowing through the scratches. On post-processing, the clarity was stunning, and the timbral quality was not changed. At one point, clicks appeared to break through but on listening back via pre-processing, that part of the signal had broadband noise of a low amplitude, not clicks. In fact, it appeared to be distortion due to the microphone overloading on the original performance.

In another test a sample was transferred from an Akai S900 to a visual editor on an Atari ST where "spikes" were drawn onto the waveform. After processing by the De-Clicker, the signal was perfectly clean and I would defy anyone to be able to either hear where the spikes were, or to tell any difference between the processed and original sounds. This procedure is as applicable to samples on, say, a Synclavier as to those on a humble 12-bit sampler.

It never ceases to amaze me how many clicks are left on CDs. While demonstrating a direct-to-disk system some years ago, I used a Bruce Hornsby track called 'Look Out Any Window' which has a click during the instrumental intro - it actually sounds like a punch-in error. Running it through the De-Clicker removed all trace of it and this, to me, is the most remarkable use of such a device, because it is processing a complex digital signal without audibly altering it except for removing errors which shouldn't be there.

BEFORE GOING ANY further, perhaps we should talk cost: £14,500 for a mono module and frame with digital I/O modules and psu, while a stereo equivalent will set you back £21,000. It's clearly not for the part-time enthusiast. It is, however, a unique system with many uses in the professional audio field - the first of which is restoring old 78 recordings to their former glory. Of course, this is a very specialised use and not one which many technicians would see as being relevant to them. The second use, then, is in the course of mastering digital recordings - be they pop, classical or anything in between. By running the audio signal through a stereo De-Clicking system, the integrity of the final signal will not be compromised by any bit errors or inadvertent extraneous spikes or noise appearing through the mains filters.

As the De-Clicker works in real time with only a 300mS delay between input and output, it could also be used for broadcast purposes, be they audio (FM) or video (Nicam). Consequently, there are also many uses within the audio-visual industry for such a unit.

The De-Clicker is an incredible device, and one which deserves due recognition. 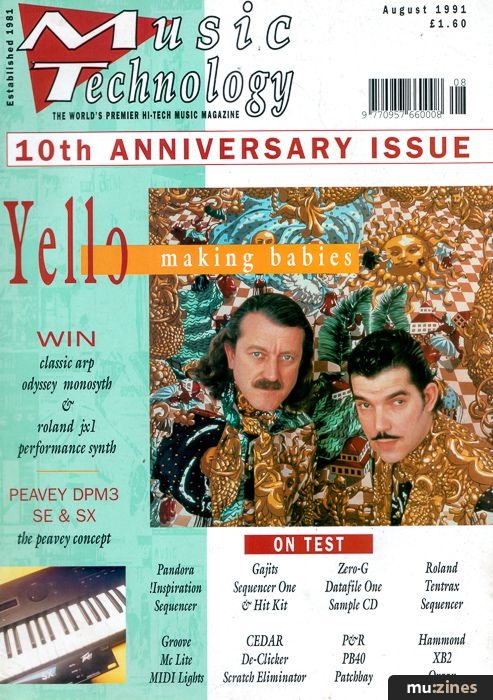