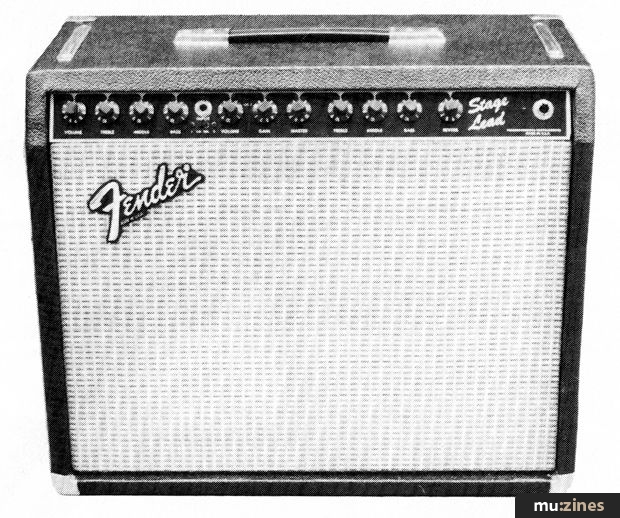 Fender amplifiers have a pedigree that stretches back to 1945 when the first ever production amplifiers went on sale. They were tube amps and were greeted with the same enthusiasm that their new Hi-Tech series is receiving at present. The Stage Lead is part of this series and is a transistor combo giving a powerful 100 watts (rms) through its 8 ohm Fender Special Design 12" speaker.

The compact 21" x 17" x 11" unit is sturdily constructed from marine ply timber with an all-steel cadmium chassis, all of which is hidden beneath the durable black leather cloth finish and protected by metal corners. The amp is fairly heavy at 35 pounds but is of manageable proportions and therefore quite portable.

The amp has two separate channels which are selectable with one input socket, mounted between channel 1 and 2 controls. This does mean that you cannot share your amp with another group member or instrument which you often need to do when bands are first starting up and individual members can't yet afford their own gear. Another input socket should really be added.

Channel 1 has an independent volume control with treble, mid and bass controls. These appeared to give around 12 dB of signal boost to their respective parts of the frequency range and combined well to provide various degrees of tonal modification. The overall feeling given by this channel is that of a bright, punchy sound especially suited to rhythm guitar. One idiosyncratic feature of this channel was the equalisation controls. By turning all three knobs off the signal output was cut completely and no sound was heard — strange.

A red LED lights when channel 2 is selected. This channel should be considered as your 'lead' channel since it is provided with volume, gain and master volume controls which affect channel 2 signals only and let you overdrive the preamp circuitry creating distortion.

For example, by setting volume to full and master to number 5 you can get a warm, mid-boosted overdrive sound which is ideal for chunky chord work or bluesy leads. By increasing the gain control as well, the amount of overdrive increases producing an excellent approximation of a valve amplifier. To hear this sound you wouldn't believe it was coming from a transistor amp and is a credit to Fender's design team.

In conjunction with the above you have a further three equalisation controls; treble, mid and bass which permit a wide permutation of tones to be created. The mid control is a little unusual as it is an active boost/cut type which proved handy for removing most midrange signal and achieving the 'twangy', hollow sound much loved by funk/disco rhythm guitarists.

The final control gives reverb mix of dry and treated signals. The reverb unit is a spring-line device housed in a black, waterproof plastic cover and screwed to the inside floor of the cabinet. It connects to the amplifier circuitry by two phono plugs.

Actually, the reverb is one of the best around producing, as it does, a deep, clear and smooth sound which acts on both channels and doesn't 'ring' whenever the amp is jolted slightly. An on/off toggle switch with associated pilot indicator completes the front panel features.

Around the back there are three jack sockets provided for footswitch functions, preamp output and power amp input connections. The footswitch socket accepts the optional dual function unit which lets you switch your guitar between channels, handy for quick, easy changes from lead to rhythm settings for instance, and controls the reverb on/off selection also.

Preamp and power amp sockets can be used to form an effects loop for connecting external signal processor devices such as echoes, flangers and chorus for example. The preamp out should be connected to the device input and its output connected to the power amp input socket on the amp. This helps reduce some of the noise produced by such effects.

The Stage Lead is an impressive package. The open-backed cabinet design and speaker project the sound well with a wider dispersion characteristic than normally expected from an amp of this class. This is an attribute that is generally overlooked when choosing an amplifier yet can be very important if the amp is to be used as both backline and quasi-PA in a small club say.

The Stage Lead is by no means a cheap amplifier, but who's worried about expense when you can obtain the quality of sound that this amp offers, and it is after all the 'sound' that counts. It is a compact, attractive amplifier that is designed primarily for the guitarist looking for both a good, clean sound for rhythm and a fat, warm and expressive overdrive for lead. Try it and you'll be pleasantly surprised.

Recommended retail price of the Stage Lead is £371 including VAT. Further details from CBS/Fender, (Contact Details). 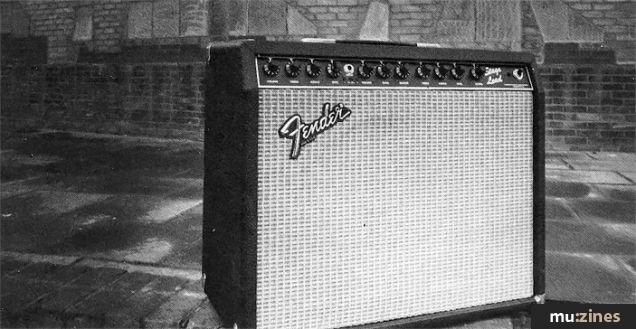