For the benefit of the uninitiated, synthesiser performance controls aren't anything to do with Musicians' Union regulations regarding the use of the synthesiser for live work; but specific control devices that are used to modify certain parameters of the sound whilst the instrument is actually being played.

The necessity for performance controls is due to the very nature of the synthesiser. No acoustic instrument produces a sound with constant pitch, timbre and amplitude - at least two of these will vary during the course of a note. The synthesiser, with its voltage controlled modulation facilities, can automatically change the pitch, timbre and amplitude of the sound (envelope modulation of the VCF, VCA etc.) but to really get the best out of the instrument the human element has to be injected and this is where the performance controls come in.

Obviously it is possible to twiddle the VCF cutoff frequency knob (say) whilst playing the keyboard, but preferably special controls should be used that are easy to operate, conveniently located, and able to accurately modify specific parameters. 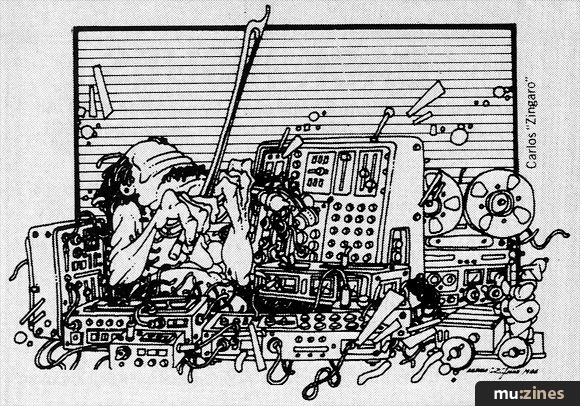 Let's get back to our analogy between the synthesiser and acoustic instruments; the latter have, over the years evolved into complex pieces of equipment that are designed to produce specific sounds and to accept the various control signals (e.g. breath control) that the player feeds it. However, the synthesiser's controls have come from existing technology, and have been adapted to fit the role demanded by the synthesiser's modus operandi. For example, the keyboard is virtually the same device as used on the electric and electronic organs, yet it is only capable of determining a 'steady state' pitch - what about the timbre and loudness? Obviously other controls have to be employed to enable the player to effectively shape the synthesiser's overall output.

The best known performance control is the pitch bender, and to my mind a synthesiser isn't a synthesiser without one. But before discussing the various types of controllers available, we should look more closely at the problems related to user determination of pitch.

There are three different areas of pitch determination. Firstly (as previously mentioned) we have the 'steady state' pitch as defined by which note is played on the keyboard. Secondly, we have manual pitch modulation - pitch-bend - which takes the form of a variable bias to the steady state pitch. And finally there is pitch modulation, which can take the form of periodic variation of pitch with time about the steady state frequency (LFO modulation), or aperiodic variation with time (envelope or noise modulation). A standard monophonic synthesiser should offer the musician facilities to control all three types simultaneously. See Figure 1.

There is a close analogy between pitch and timbre when considering voltage controlled synthesisers - with the frequency of the oscillators related to the frequency of the filter cut-off point - so again there are three degrees of timbral assessment: the steady state cutoff point, the periodic variation of pitch with time (LFO or oscillator modulation) and aperiodic variation of pitch with time (EG/Noise modulation). However, the ability to be able to quickly control these filter parameters is less important than for the pitch.

We'll start by looking at just the pitchbender, though in many cases, the modulation wheel is designed along much the same lines.

What exactly do you want a pitch-bender to do? Now this is important because there are several options available, and each one has its own unique qualities;

1. Do you want to be able to bend the pitch both up and down?

2. Should the control return the pitch to its initial 'in-tune' position when released or remain as set?

3. What kind of physical device do you prefer?

4. Do you need to be able to control more than one parameter with this single device?

5. Have you thought about the options available from touch or force sensitive keyboards?

A further consideration must relate to standardisation. As we shall see, mastery of the performance controls isn't easily achieved - it can take a lot of practice to be able to control a synthesiser with anything like as much confidence as a guitarist playing his 'axe'. So should you consider spending months getting to grips with one particular type of controller, only to find that when you come to update your synth, no other manufacturer has used this kind of mechanism?

The wheels, one for pitchbend, the other for modulation, have changed little since their inception on the Minimoog some twelve years ago. Figure 2 shows how simple the centre-detent pitchbend mechanism is. The wheel is made from a plastic disc and can be considered to operate rather like a giant edge-wheel knob. A small notch is formed into the plastic and a spring-loaded conical section mounted so that it presses onto the side of the wheel. At one point the conical piece of plastic will 'fall into' the notch and anchor the wheel. By applying pressure to turn the wheel, the cone can be freed from the notch and the wheel becomes free to turn the potentiometer again. This is a simple but clever system that reliably anchors the performance control in its mid position whilst still allowing the pitch to be shifted either up or down.

Many other manufacturers have adopted Moog's wheels for their instruments, and one, namely Sequential Circuits Inc, have even managed to simplify the mechanism - Figure 3 shows how SCI have used half of a P-clip to anchor the wheel in its central position.


It must be remembered that it is vitally important that the centre-detent mechanism clamps the control to its exact original position - a mere fractional amount of play will put the synthesiser out of tune with its accompanying instruments. In fact, the Moog system as detailed above is prone to wear - the conical piece of plastic tends to get rounded off, and it is necessary to replace it every year or so (depending on use). The SCI approach will last virtually for ever. The accompanying modulation wheel simply acts as an amount control with no centre-detent mechanism.

Moog toyed with the idea of using sprung wheels that automatically returned the pitchbend knob to its initial position when released. The Sonic VI was equipped with one such device. The nice thing about these devices were that they felt good to use, it was as if you were bending against an increasing force - a sensation similar to that experienced by a guitarist who finds the restoring force becoming more strong the further he bends the string. The disadvantage with this system is that you cannot leave the control set at a particular level as it returns to its initial position as soon as it is released.

Moog originally developed the ribbon controller in the Sixties for use with his modular instruments, at this time the device was about 30 inches long and consisted of two separate ribbons from which a control voltage and a trigger pulse could be derived. Many of you will remember Emerson pratting around on stage making the most of this controllers phallic imagery. This control device was modified so that it could be used effectively in such Moog instruments as the Polymoog, Multimoog, Micromoog and in some Minimoogs. It consists of a short metallic strip (about 5 inches long) and it generates, with the aid of its back-up circuitry, a voltage directly proportional to the point at which it is touched - thus the further away from the centre position it is touched, the greater or lesser the control voltage, and consequently the pitch, becomes. The ribbon controller has a lot going for it as it is an electronic device and therefore there has been no problem returning it to its initial position; second, by rocking your finger on the strip you can induce a manual vibrato in much the same way that a violinist does; and third, you don't have to bend the note up before you can come backdown - just touch the strip at an extremity and the pitch is instantly changed. You can even use it to do manual trills. The main reason that the ribbon controller isn't more widely used is that a lot of musicians feel that the ribbon is rather impersonal, and lacks feel as you aren't actually moving or turning anything (except your finger).

Yamaha also utilise an interesting variation on the ribbon theme. The CS80 (voice assignable polyphonic) has a strip around 18 inches long positioned just above the keyboard. You can touch this strip anywhere along its length and nothing will happen, but then by moving your finger in either direction the pitch can be raised or lowered, until releasing the strip returns the tuning to its original state. This is quite a nice idea, and it also gives a very wide pitchbending range.

Next we'll be looking at three more forms of modulation control: the proportional pressure pads used by ARP, the sprung lever used by Roland and the joystick often adopted by Korg, Polyfusion and others. Also we'll investigate how force and velocity sensitive keyboards can improve your playing technique. 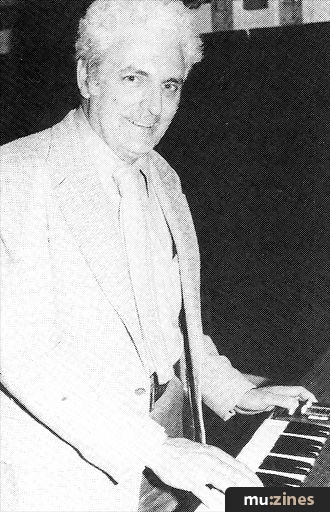