The fifth part in our series on programming covers Latin dance rhythms and musical sequences.

This month, Edgar G. Roover teams up with Joe and Pauly Ortiz for an exploration of Salsa and Afro Latin rhythms.

If you've been using the patterns provided in the September and October issues of RM, your programming skills should be sufficiently honed to progress to something a bit more complex, but well worth the little extra effort to program in. The Latin patterns provided are as authentic as they come, and a real education to those who don't know much about this style of music.

The basic and essential instruments found in Latin music are the congas, bass and piano. Additional instruments commonly found are bongos and timbales, with the minor instruments being guiro, clave, maracas and cowbell. A really good complement of percussion sounds would be ideal for these patterns, but any kind of keyboard or drum machine can produce good results with the right programming.

We have written the parts in four-bar segments, providing drums, percussion, bass and piano lines and have made it as easy as possible for the reader to understand and to start programming these rhythms straight away; to keep a continuous feel, we've kept to the grid format followed in the series so far. The top of the grid will act as an info line with the keyboard chords marked above the beat at which they occur. All grids used are to a resolution of 16ths — 16 16ths to a bar of 4/4. Piano lines in Latin music are normally played in octaves with block chords used only for accenting the up beats, as evident in all three patterns.

For pattern 1, Cha Cha, the tempo we recommend is 118bpm — Cha Cha would sound too rushed if it were much faster than, say, 125bpm, and it would really grind to a halt at tempos slower than 80-90 bpm. The Cha Cha has been around for a long time and is the very basis of modern rock and pop music. Traditionally speaking, Latin music would not actually include a drum kit, but as Latin music becomes more and more westernised, their inclusion is not out of context. Pattern 1 consists of 11 drum and percussion sounds with bass and piano line, flute and string line, interacting in a way which produces a very solid but airy feel. The flute, strings and Brass (if any) ideally should be authentic sounding to begin with, but if you're feeling 'synthetic', then so be it. The drum kit should be 'big and fat', although a thin snare would also work. Hi-hats and cymbals need only be pretty standard sounds, though the percussion sounds should be as authentic as possible. A tip for you — if guiros are not available, long and short cabasa may be used instead. Roland Sound Canvas users will have no problem in the sound department, as this unit is well endowed with percussion, as are the U20/220 with the Latin percussion/FX card installed. If you are using a sampler loaded with these sounds, the congas must not be tuned too high or you'll lose the meat of the groove. Common to all patterns is the use of acoustic upright bass, and bright piano, although again these can be substituted by electric bass and piano.

For Pattern 2, Mambo, a tempo of 186 bpm is recommended, as the Mambo has a more
aggressive feel compared to the Cha Cha. Mambo rhythms are used extensively in all modern-day dance, jazz and pop music so there's no getting away from this one. (Something you probably didn't know is that at tempos of between 110 and 140bpm, the rhythm may become a Charanga.) There are nine drum and percussion sounds to this pattern and the same comments regarding sounds and instruments would apply as for Cha Cha.

Pattern 3, the Merengue, needs a tempo of around 140 bpm. If you're a Latin band doing gigs in the States and you don't have a Merengue in your repertoire, then run for cover, as this rhythm is guaranteed to whip even the most lethargic party-goer into a frenzy! The rhythm is not unlike the famous Lambada (give or take a few hundred bpms). Miami Sound Machine haven't done too badly on this one either. Ten drum and percussion sounds grace this most lively beat.

A common misconception regarding basslines is that you should play on the beat instead of just ahead of it. True, most basslines may start on the beat of the first bar, but from there on, it's the up beat 8th of beat 2, and a pluck on beat 4 which spills over into the next bar, and so on. In fact there may be times where the first beat is missed out altogether, only to start on beat 3. You'd be forgiven for thinking that Latin music sounds easy, but as you can see, it's more than the sum of its parts — it's exactly the same with Reggae music. There seems to be a lot of repetition, but subtle changes take place, on average every 2 to 4 bars on one instrument or another.

When soloing over a Latin groove, try using vibes for a light feel, a trumpet or sax for a raunchier feel and, if you're soloing on a piano, then octaves are de rigeur (also pretty challenging!). Brass stabs should be kept short and again on the upbeat of the 8th or 16th in octaves, although chord stabs can work as well. The best Latin music is played from the heart with a lot of soul. If you can get your hands on these, check out some Ray Barretto, Mongo Santamaria, Fania All Stars, Ruben Blades (yes, the actor), Irakere, Eddie Palmieri and many others. Time for a plug here but if you can't lay your hands on any of this stuff, then Heavenly Music have an extensive range of Latin and Salsa MIDI files in their catalogue.

To sum up, all you need is to play that rhythm, a room full of cheerful people (drinking Puerto Rican Bacardi Rum, of course) and who knows, Afro Latin music may be recognised again as the influential force of popular music. 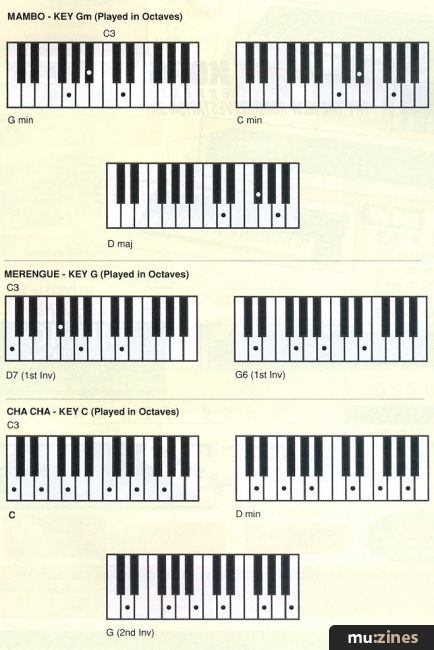 U2: The Unforgettable Tour

> U2: The Unforgettable Tour