A budget MIDI sequencing package for the Atari ST (what isn't?). Our own St discovers that a fraction of the price doesn't necessarily mean a fraction of the facilities - especially when you're talking computer software.

Cheap as the Atari ST has become, its performance as a MIDI sequencer is disappointing without software - now you can get hardware and software for barely more than the cost of the computer. 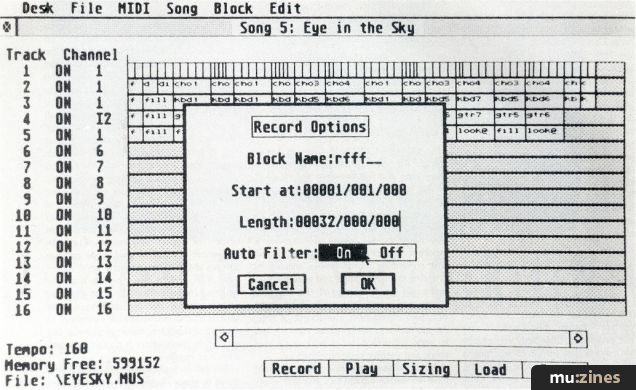 AS THE PRICE of Atari ST software continues to fall faster than the FT Index, we've reached a situation where MIDI sequencing software costs almost as much as the computer itself. In a way that's not surprising: falling hardware costs and the economics of mass manufacturing have little to do with the financial realities of writing and supporting specialist software.

Yet there's undoubtedly a market for budget MIDI sequencing software, whether it's the ST owner who'd like to dabble in this thing called MIDI sequencing or the musician who can only just afford the computer let alone the software to run on it.

Microdeal's Super Conductor fits the budget bill perfectly. At £50 it's a snip when compared to the Steinberg Pro24s and C-Lab Creators of this world.

SUPER CONDUCTOR ALLOWS you to store up to 10 songs at a time in the STs memory. The initial screen presents you with a song list which Microdeal refer to as a Set (there are load and save Set options for disk storage). You can get Super Conductor to play through your entire Set, with options between songs for no delay, slight pause, or wait for keypress.

Clicking on a song or pressing the equivalent function key (F1-F10) takes you to the relevant Song Edit Buffer display, which presents you with a computer equivalent of a 16-track tape.

Each track of "tape" is divided graphically into blocks of varying length, and depending on the length of a block it will be identified by a name.

These blocks are the basis of your music, with up to 255 available for each song. You can call up an alphabetical list of blocks for each song at any time; this will also tell you how long each block is in bar/beat/click format. 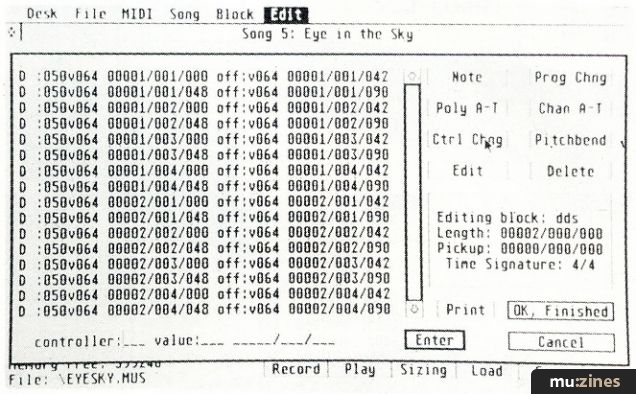 To all intents and purposes a block can appear in a song as many times as you want, with no duplication of data. It's an approach that's kind on memory, though Super Conductor is hardly short on spare bytes.

What's disappointing, not to say confusing, is that there are no bar numbers to guide you, nor is there a current position counter.

When you enter Record mode you have the option of setting a stop location or of leaving the block open-ended. If the former, Super Conductor automatically stops recording at the relevant location. However, if you stop the recording process before the specified end position, it shortens the length of the block accordingly, which seems rather daft. What's more, recording must always start from the beginning of the block being recorded; punch in/out is not part of Super Conductor's vocabulary.

Super Conductor can record to a resolution of 96ppqn. There are none of the fancy quantisation features found on more expensive sequencers, like being able to recover original versions after quantising. For this reason it's always best to copy a block to another block before any attempt at quantising.

I should point out here that Super Conductor will only store a single MIDI channel per track, with a block taking on the channel of whichever track it's assigned to. Split keyboards and MIDI guitars in mono mode go out of the window, I'm afraid.

Another irritation is that "echo back" mode isn't available during recording, which means several things: you can't hear all slave instrument parts with the instrument sounds they're intended for, you can't play drum machine sounds from a MIDI keyboard, and your silent MIDI controller keyboard will remain resolutely silent. It's possible to get round these problems with some creative matrix switching, but I could think of better things to do with my time.

On a brighter note, Microdeal's sequencer has a useful array of high-level block editing functions. Blocks can be mixed, copied, filtered, transposed, split, appended and of course quantised. Filtering allows you to select specific MIDI data to be filtered globally from a block. An individual controller code can be singled out if you want, while in the case of pitch and velocity, specific ranges can be filtered out. If you select auto filtering at the record stage, any MIDI commands highlighted in the filter window will be filtered out before they reach the STs memory.

Copy is self-explanatory, but it's worth pointing out that you can copy blocks from one song to another - the only way of transferring data between different song files. 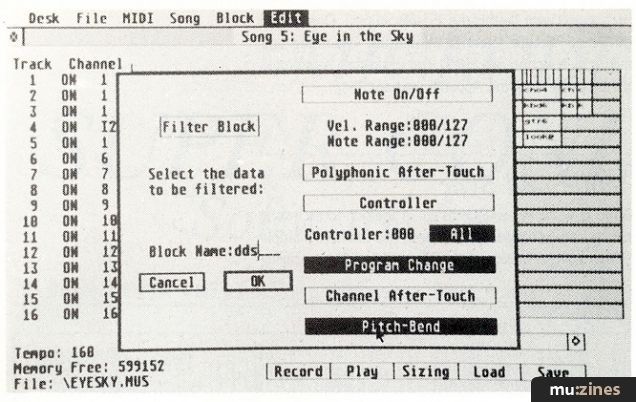 Transposition allows you to globally transpose the pitch and velocity data of a block, and additionally to set all velocity data to the same value.

Split allows you to split a block at any position. In this way you can break down a block into as many constituent parts as you want (within the 255-block limit). One use for this is to localise filtering, transposing, quantising and mixing to a section of a block. You could then reassemble the block by using the Append function.

TIME FOR A definite thumbs up: in addition to each song having its own tempo (40-213bpm), you can have multiple tempo changes within a song. This is achieved by specifying a tempo for any number of blocks in the highest-numbered "active" track in the song table (dedicating track 16 to this function is a good idea). Tempi are step-specific rather than block-specific, so the same block in a different position can have a different tempo.

Tempo changes are executed even if the track is turned off, so it doesn't matter which blocks you use as long as they start where you want a change of tempo. The net result is effectively the same as Pro24's mastertrack, if a little trickier to implement.

Microdeal have included some useful MIDI features, such as the ability to send out all note off commands and sustain off commands on all MIDI channels at the click of a mouse. And if drastic action is called for, Super Conductor can send out a note off command for every note on every MIDI channel. In fact I never once had a problem with droning notes, which suggests the sequencer is taking care of business all by itself.

Super Conductor sends song position pointers and song select codes in addition to the usual start/stop/continue and 24ppqn MIDI clock. Perhaps the one really bad piece of news is the sequencer's inability to respond to MIDI sync information; it just won't slave up to anything, which unfortunately makes the software a non-starter for anyone wanting to hook up sequencers and tape machines. A definite minus score on this one, Microdeal.

Better news comes with the Edit Block facility, which turns out to be a MIDI event editor. Here you can enter MIDI data from scratch or edit an existing block of data. Aficionados of step-time entry should know that this is the only way Super Conductor allows you to indulge in such practices.

Along with note data, Super Conductor allows you to enter and edit polyphonic and channel aftertouch, control changes, pitch-bend and program changes. On the minus side, the somewhat densely-packed data display isn't helped by Super Conductor's inability to filter out different MIDI command types from the display (so that, for instance, you could filter multitudinous pitch-bend data and concentrate on the notes). 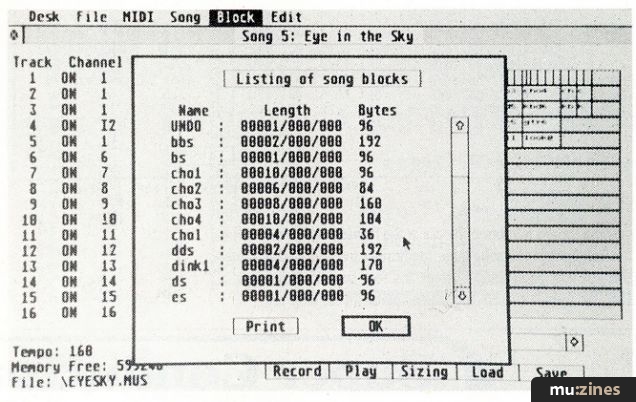 Overall the Edit Block screen is a good thing, though. It gives you precise access to and control over your music, and has great educational and diagnostic value.

A more unusual feature is the utilisation of the Atari's internal sound chip as three monophonic synthesisers. To activate a sound-chip voice you simply set the channel number for a particular track to 11, 12 or 13. The three voices, which default to different sounds, may be edited by embedding command codes (in the form of MIDI patch changes and controller codes) into the blocks, either by sending them from your MIDI keyboard or by typing them into the Edit Block data list. Okay, it's not a feature which will appeal to too many musicians, yet for anyone short of gear it does at least offer the opportunity of three more voices.

Good news for any MIDI musician is a System Exclusive mode which allows you to transfer SysEx data to and from your MIDI instruments and, of course, store it to disk. Although there are no editing facilities within the program, Super Conductor saves SysEx data in a file format which is compatible with First Word and other ST word processors - so you can edit your SysEx data as a text file if you feel up to it.

You can also use this text-file compatibility to create dump requests, as, again, Super Conductor itself has no such facility. Save your dump request file to disk, load it into the SysEx transmit buffer and send the command out to the relevant instrument. The sequencer's receive buffer is always active in System Exclusive mode, so it will capture SysEx data spewed out by your MIDI instrument in response to the dump request.

As incoming data will be appended to any data already in the receive buffer, patch data for all your instruments can be saved off and subsequently transmitted as a single file. The size of each buffer depends on the ST you're using (520/1040/Mega) and the amount of song data in memory. Bearing this in mind, SysEx data can be saved and loaded at any time without affecting the song data in memory.

Finally a word of praise for the manual, which is lucidly written, sensibly structured and includes an index. If the manual for a relatively cheap piece of software like this includes an index, then the manuals for more expensive - and more complex - software packages sure as hell should. Guilty parties: it's really time you got your act together.

YOU COULD PLACE this review alongside that of a more expensive ST sequencing package and tick off all the features Super Conductor hasn't got. If the resulting list bothers you then maybe you should start saving those extra pennies. However, if you want to get started in ST-based MIDI sequencing but have a modest budget there's no better place to start than with Super Conductor. It's straightforward, powerful for its price, and above all enjoyable to use.

In fact there's only one thing which really mars Microdeal's sequencer: its inability to respond to external MIDI sync. There is apparently an update due soon, so maybe Microdeal will atone for their one sin.

In the meantime, give Santa the word: Super Conductor should be in your stocking this Christmas. 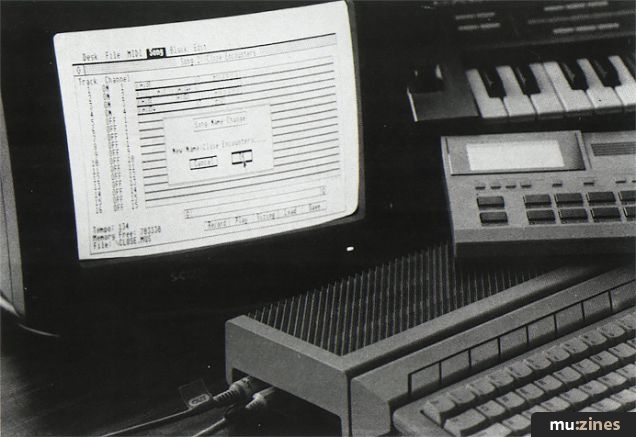 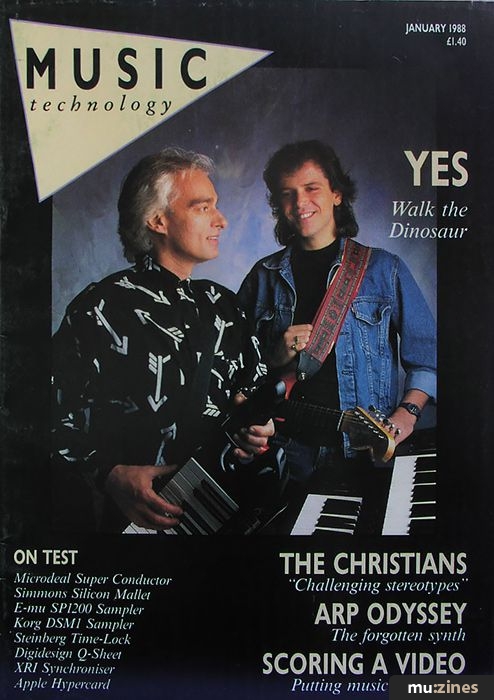 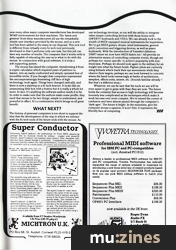 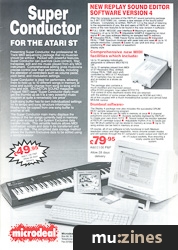