Oberheim's two Performance Effects units are something of a new direction for a company associated with classic analogue synths. Paul Ireson tries them out and finds a few surprises in store - not all of them pleasant. 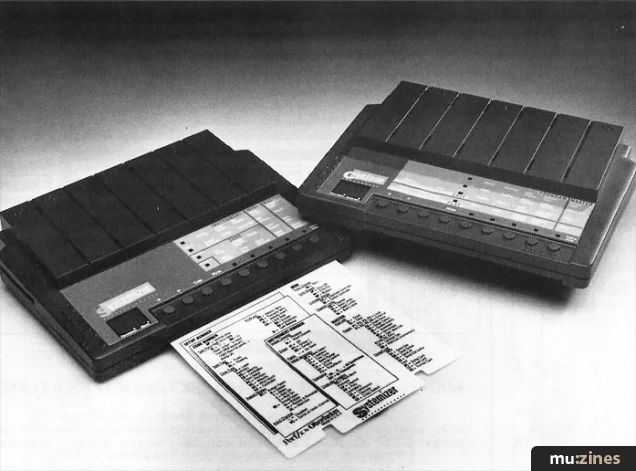 Oberheim have a reputation for producing fairly heavy duty, classy bits of gear, generally along the lines of synths and drum machines - good professional stuff, well built, and nicely finished off. This makes their new Performance Effects range (Perf/x) all the more surprising, because as well as being a new product area for Oberheim - the units are essentially MIDI data processors - their appearance is something else. Classy, chunky? I've seen sturdier novelties fall out of Christmas crackers!

Joking aside, the construction of the Perf/x units really is pretty lousy. The casing and buttons (which seem to belong to a kiddies' toy of some kind) can just about be excused on cost-saving grounds, but then there are slots cut into the plastic top panel that are obviously destined to have coffee and beer poured into them - not exactly a good idea on a 'performance' unit. I presume they're supposed to make the unit look pretty, but I'd be lying through my teeth if I said that they did.

To leave physical attributes aside for a moment, both units come under the classification of 'MIDI data processors': Cyclone is an arpeggiator; Systemizer is a note and MIDI controller data re-channeliser designed to expand the performance and control facilities of any MIDI keyboard that has no split and layering features of its own.

The rear panel of each device sports an irritatingly fiddly power switch, MIDI In and Out, a socket for the separate power supply, and four footswitch sockets. The MIDI connections caused me more than a little grief: getting plugs to fit into them was bad enough, getting them out again was something else. The routine went something like this: grasp MIDI plug in one hand and steady Perf/x in the other; pull hard; rest for a few minutes; pull again. Re-assemble the DIN plug that has just fallen apart in your hands; pull again; then remove the DIN plug piece by piece. The Design Council have collective nightmares about things like this, and who can blame them.

The first of the two units, the Cyclone, is basically an arpeggiator, albeit a fairly souped up one. Those who remember the simple arpeggiators found on old analogue synthesizers will know that they could generate arpeggios of any held chords, in strict pulse timing, with the option perhaps of adding to the basic arpeggio octaves of each held note. The Cyclone takes this concept aside and feeds it a few steroids before putting it into operation in its uninspiring grey plastic case.

On a basic level, the Cyclone will arpeggiate held notes in any one of a number of possible orders - up, down, up then down, down then up, in the order played, in reverse order, forwards then backwards, backwards then forwards, or randomly. The arpeggiation possibilities are then extended in two ways: firstly, by allowing modification of/addition to the held and arpeggiating notes; and secondly, by allowing the triggering of notes by rhythms more complex than a simple pulse.

Let's say that a simple three note chord is held down on a keyboard. In the simplest form of arpeggiation, these notes will just play up or down, the cycle repeating every three notes. Cyclone allows you to add more notes to this simple pattern, either stacked on top of the three cycling notes, or added into the pattern thereby lengthening it. The stacked notes are called Doubled notes, and up to eight can be added, each at a different transposition interval. Each Double note can be output on any MIDI channel independently. The extra notes in the pattern are called Transpose notes: again, up to eight can be added, each at any musical interval from the root note. Some interesting effects can be obtained by programming the Cyclone to play the basic notes, then a fifth up, then a further two semitones, and so on.

As the Cyclone arpeggiates, it can also be set to play inversions of held chords, running through each inversion at each transposition - once you reach this level in the Cyclone's operation, the arpeggiation rapidly starts to seem less repetitive, as a three note chord can generate a 96-note sequence. It's certainly a great release to take the arpeggiator away from simple sequences, but there's an unfortunate side-effect: with a piano sound selected, complicated arpeggios start to sound like a tediously perfect session of piano practice.

The Cyclone can generate its own tempo and drive external sequencers and drum machines with a MIDI clock signal, or slave to an external MIDI clock. When running on its internal clock, the tempo can be modulated with a MIDI controller such as Pitch Bend. A Tap Tempo option is also available, by which the Cyclone's internal tempo is determined by tapping an optional footswitch plugged into the rear. Chords can be latched (held), and their arpeggio played back and transposed 'live' from a control section of the keyboard. As this goes on, a second independent arpeggio can be generated from the remainder of the keyboard. It is, by the way, possible to split the keyboard and generate two independent arpeggios, one from each keyboard section.

Things get more interesting when trigger sources other than a simple pulse are used. The Cyclone actually has the facility to record short sequences - up to 32 notes in real time. The rhythmic element of the sequence (note length and timing) can be used separately from the melodic element (MIDI note numbers), so the recorded rhythm can be used to play held notes or the recorded notes may be triggered in order by a live, played rhythm of notes. This second option is rather similar to the 'one key play' function on Casio home keyboards.

The Cyclone offers several ways of dealing with polyphony in these triggering arrangements. A recorded sequence that consists of chords and monophonic notes can be triggered monophonically (ie. one note at a time for each triggering note) or polyphonically (single trigger notes will trigger chords at the appropriate point in the sequence).

An entire configuration of all the arpeggiation parameters is called a Patch, and 32 of these can be stored internally. Using the Cyclone was certainly an interesting (though at times slightly baffling) experience, particularly because of the potential of separating recorded rhythms from notes and imposing the former on notes entered live.

The Cyclone is described as a 'performance effect' - I found the results of using it too unpredictable for it to be a performance tool for me, but for those who prefer random elements to bounce off, it may be. One role it did seem to fulfill rather better was that of a kind of ideas generator, producing a stream of melodic or rhythmic ideas from a few simple elements which could then be recorded into a sequencer.

The Systemizer is somewhat easier to get to grips with than the Cyclone - and hopefully easier to describe in print. It allows the input of a simple MIDI keyboard - one MIDI channel, no splits, etc - to generate the more complex MIDI output that allows control of a setup incorporating devices which respond on all 16 MIDI channels. The Systemizer also acts as a kind of system configurer, memorising the correct patches for each connected device in a setup.

32 memory locations are available for Setups, each of which is a map of how the master keyboard is connected via MIDI to all of the slave instruments. Each Setup consists at its most basic level of four Zones. Three of these Zones are assigned to the keyboard to re-channel note and performance data to other instruments, and store program change numbers for each connected instrument. The fourth Zone cannot re-channel performance data, only store program change data, so allowing devices that are not played from the keyboard (effects, etc) to be correctly configured for each Setup. Each Zone contains four Instruments, each of which re-transmits note and controller data received on the master channel on its own specified MIDI channel. The three Zones can be split across the keyboard, making two or three-way splits feasible, or a single Zone can occupy the whole keyboard. However, Zones cannot overlap.

The four Instruments in each Zone can be layered, or cross-faded or cross-switched in a variety of ways. Switching or mixing can be carried out via velocity or controller data or position on the keyboard. In the case of positional crossfading, the cross-fade seems to be carried out by disabling the velocity sensitivity of the whole keyboard and then scaling the velocity of one instrument up the keyboard, and that of another down.

Splits are not possible within Zones. A further interesting way to play the four instruments in a Zone is to employ Groups - up to four instruments can be combined together to form, effectively, a single large polyphonic instrument. Notes are played on each contributing instrument in rotation.

So, with the aid of the Systemizer, up to 12 Instruments can be controlled from a simple MIDI keyboard: four layered, cross-faded or cross-switched in each of three Zones. Each Setup also stores a PG (program change) value for each Instrument, so that the right sound will be called up for each configuration of the keyboard. Pitch bend range, MIDI volume level, omni on/off, fine tune and transpose can also be set for each Instrument.

The fourth Zone, the SP Zone, does not accept controller data of any kind but does allow program changes to be transmitted to another four devices - effects units perhaps - that are being used at the same time as the instruments played in Zones 1, 2 and 3. The use of the SP Zone means that patch changes can be transmitted on all 16 MIDI channels for each Setup. Four footswitches can be plugged into the back of the Systemizer, and a further four MIDI pedals incorporated into each Setup if required. These can be used to duplicate the front panel buttons, increment parameters, or recall an alternative for each Setup.

These two Perf/x units, though outwardly almost identical, made very different impressions on me. Admittedly, my first impression of both was the same - I won't bore you with another outraged rant on aesthetics - but having used them for a while, they are quite different in character. The Systemizer is the more down to earth of the two, a unit that for some people will be a very useful addition to a MIDI setup that has perhaps outgrown the control facilities offered by a first main keyboard. The Cyclone is a little more esoteric, unexpected, and perhaps for those reasons will find popularity with musicians who feel that an interactive compositional/accompaniment device such as this is for them. 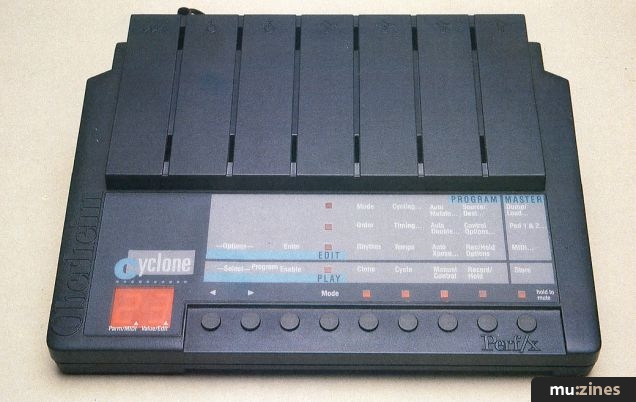 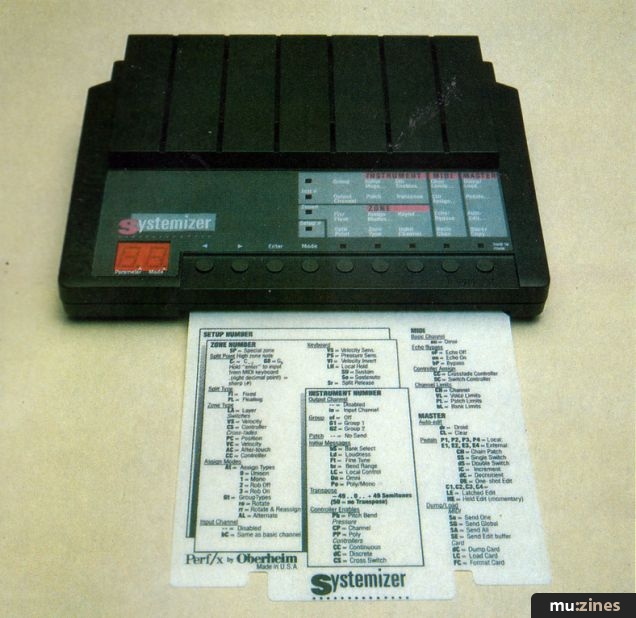 How to Set Up a Home Studio

> How to Set Up a Home Studio