This month an explanation of the function of the Helmholtz Resonator.

In last month's article we discussed the design and construction of panel sound absorbers. This time we deal with a second form of acoustic control, namely the Helmholtz Resonator.

The absorption characteristics of panel-type designs produce a unit which is ideal for making large scale changes to the acoustics of a room. The resonator design on the other hand is capable of producing an absorber which can, within reason, effectively remove very narrow bands of frequencies and is particularly useful for flattening out peaks in a room's frequency response.

An example of this would be when a concert hall used by say a chamber orchestra, has a particularly bad resonance-mode which colours the sound of the instruments and results in that room being difficult to play in. The installation of resonators to tune out the offending resonance modes can turn what was once a venue with a bad sound into a hall which has a flatter frequency response and possesses a pleasant reverberation characteristic.

In the 19th Century the German physicist Helmholtz published a book which in part dealt with the theory of resonating air masses and established the mathematical formula by which the natural resonance frequency of a trapped volume of air could be worked out. Designs which embody this theory in a practical form have now become known as Helmholtz resonators. A milk bottle is an excellent example of a Helmholtz resonator and by blowing across the top of the bottle you can prove to yourself that a trapped body of air resonates at one particular frequency; change the size of the bottle and the frequency changes too. Figure 1 shows a simple Helmholtz resonator.

Although the idea of using Helmholtz resonators is an appealing one, the mathematical aspect of realising such a design is a little tricky and perhaps too involved for the average reader. As the use of single Helmholtz resonators are generally confined to problematic low frequencies it's uneconomical for most people to build such units; therefore it makes good sense to construct a multiple resonator as illustrated in Figure 2. This can be seen as a non-specific design to tackle the overall correction of acoustic problems.

As can be seen, a box is first constructed and filled with fibreglass which acts as a sound dampening material. The front is then covered with a hardboard type product which is punched with holes; this material is sometimes referred to as pegboard. Figure 2 also illustrates a side view of the design with the dotted line showing the effective shape of the resonator. This is fine for dealing with one particular problem but we can, by making a simple adjustment to the design, produce a resonator that will work at several different frequencies. Figure 3 shows a side view of this design and as can be seen the front panel is fixed at an angle so that the air space behind the panel varies in depth from one end to the other and therefore so does the resonance mode. This type of design produces a Helmholtz resonator which covers a much broader band of frequencies and can be usefully applied to studio walls when problematic frequencies have not been worked out in detail and an overall acoustic treatment is required.

Figures 1 to 3 include graphs of the absorption curve for each design and give some indication to their efficiency. As indicated by Figure 1, the single Helmholtz design operates over a very narrow range. Figure 2 is a multiple resonator possessing a broader absorption factor and this can be attributed to the fact that the design is similar to that of a panel absorber except for the front panel holes; it will, however, still add some of the absorption characteristics of the panel and therefore result in a much broader sound absorption factor.

The resonator dimensions should be no more than a metre square with the best results being obtained from designs of between 50 and 75 centimetres square. When designing the boxes you can use the same methods outlined last month, but as the front panels have holes in them the performance will not be exactly the same, though it's still a good starting point.

When constructing the angled design (Figure 3) you should vary the maximum depth of units to around 25 centimetres. Although this design does sacrifice a little of the maximum absorption performance of the box in favour of extending the operational bandwidth, the advantages of such a design do result in a unit which helps break up the surface of a wall, as well as absorbing the sound waves.

The installation of Helmholtz resonators is fairly straightforward. Ideally you want to fix the resonators to the parallel walls of your room or studio so that no two similar size resonators appear opposite each other: the reason why you should avoid this is to reduce the possibilities of setting up a pair of resonators which both operate at the same frequencies.

When using angled designs, placement should take into account the possibilities of one unit reflecting a sound wave straight back to another - a situation always to be avoided. A simple rule to remember is whatever you do at one point on a wall do the opposite at the same point on the wall parallel to it. If you build a number of small units of different depths which therefore result in different angled fronts, you will be able to break up the wall surface and this will help to cut down the possibilities of flutter echo and reduce resonance modes; Figure 4 shows a typical layout. If you require a better finish to the pegboard front panels you could cover the boxes with a very thin open-weave fabric, though it's important not to block the holes.

In part three, we round up this short series with an article on the acoustic treatment of floors and ceilings. 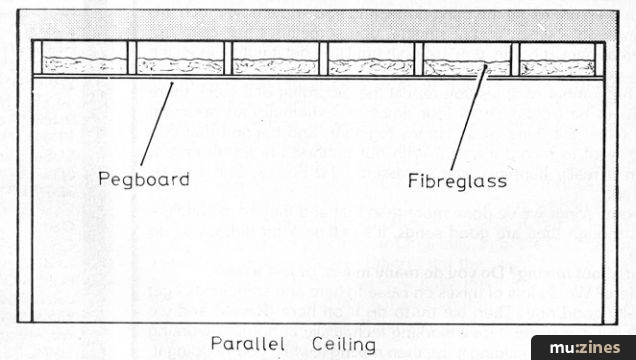