A new column that allows music industry figures to air their views on whatever it is that bugs them! Keyboard programmer, music consultant and author Paul Wiffen kicks things off this month. 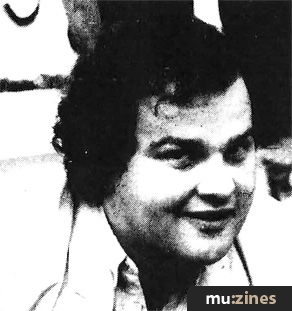 The latest round of music trade shows has furnished another generation of synths and samplers with built-in effects, plus the usual crop of cheaper and cheaper stand-alone effects boxes. While this is working wonders for the sales of these products and the resultant wealth of the manufacturers and retailers, I'm not so sure it's making such a vital contribution to modern music.

Everywhere I go all I hear these days are 'effects', a super abundance of reverb being the most obvious and the most irritating. It seems that you hear more of the effect than you do the original signal, whether in small studios recording sub-standard instruments, on home-produced demos played on keyboards with built-in effects, or even most recently, Top 40 bands playing in tiny bars and restaurants who sound more like they're playing Wembley stadium because their sound is swimming in reverb.

As so often happens when expensive technology suddenly becomes cheaper, many people go overboard with their newly acquired toys, and the result is a sudden swamping of the whole field with previously unavailable (or restricted access because of high price) effects and gimmicks. Thankfully, the stuttering effect of re-triggered samples is now dying away, but in its place has come this ocean of reverb rolling over everything.

Don't get me wrong, I like a splash of reverb as much as the next man, and I fully recognise its value in making less-than-perfect sounds acceptable. Indeed, in the early days of sampling, one of my trademarks was the sampling of sounds with reverb and other effects on them, because I, like various Japanese manufacturers, realised that reverb sells things - and I, like them, was in the business of selling my services. However, with modern day synths there is a distinct advantage over my early samples: you can take the reverb off! Granted, on a D50 it may take half a dozen separate button-pushes, but it can be done. And it should be! Not necessarily to record the sound 'dry', but just to hear what the original sounds like without reverb. Try it - you may be pleasantly surprised.

The 'smudging' effect of reverb may be necessary to help the transition from sampled attack to synthesized sustain on some D50 voices, but others sound great with less or even no reverb. And those of you who have other synths constantly routed through an SPX90 or Midiverb, try listening to the sound of each patch dry, and then make a decision as to the effect to be used (if any).

Bear in mind that while an instrument may sound great swimming in reverb on its own, in a track with half a dozen other instruments similarly processed, you will find that everything becomes muddy and indistinct, not to mention distant and lacking in that other essential ingredient - punch. Very often you can counter this by reducing the amount of 'wet' signal or the size of the reverb space. Try shrinking the size of your environment from Large Hall to Small, or Small Hall to Room. These reductions in the reverb effect may seem to diminish the sound when heard in isolation, but believe me, in the track, it will let the sound speak out more.

Be wary of over-processing drum sounds, especially in an up-tempo track where there is no room for the next reverb to die away before the next sound. This will just lead to a background level of 'mush', against which the percussive front edges of the straight drum sound will be less incisive. The end result will be a drum track that lacks power and punch and the other instruments will have trouble cutting through the mix.

With editable sounds on synths and samplers, turn off the reverb and other effects and edit the voices until they sound as good as you can possibly make them before you start adding effects. The better a sound is dry, the less processing it will need as a remedial device, and you can start to make decisions about what reverb effect to use creatively - and not as an audio 'band-aid' to hide imperfections in the source.

"Everywhere I go, all I hear these days are 'effects', a super-abundance of reverb being the most obvious and the most irritating."

On those units which describe themselves as multi-effects processors, try using the other available effects more and the reverb programs less. Often chorus or a straight echo will add the required sparkle to a sound without cluttering up the sonic space available for the rest of the mix. And a sound with less or no reverb on it will occupy a more up-front presence in a mix as compared to those with lashings of reverb.

The point of this article is not to try and get everyone to stop using reverb altogether. That is just as bad as its over-use. The idea is to try and spur you into using it more discriminatingly.

Always check the sound out dry and make any edits first. Then listen to the reverb. Compare the sound wet and dry. Decide what you are trying to achieve in processing the sound. Visualise the size of the 'space' you are putting a sound in and avoid the stadium effect; sound engineers on the road with major bands spend all their time trying to get rid of that. Don't just accept it because it sounds better than a dry sound. Try editing the built-in effects on synths as well as the sounds themselves. If you are customising patches to your own needs, why not alter the processing as well? Not only will it give the whole sound more of your own identity, it will often make the source patch less recognisable too.

The judicial use of reverb in recording and performance can be likened to the use of salt, pepper, herbs and spices in cooking. Without any at all, the food tastes bland. Completely dry, your music may suffer the same fate. But if used to excess, the taste of the food is drowned in the spicing and the quality of the original ingredients become immaterial. The same effect will be produced with excessive quantities of reverb. But get the balance just right - match the spice to the food, the type and amount of reverb to the source signal - and you will find the happy medium which enhances the original constituents rather than drowns them out.

Paul Wiffen is a freelance programmer based in London and Los Angeles; his clients have included Paul McCartney, Stevie Wonder, Vangelis, Geoff Downes and Jean-Michel Jarre. As well as contributing regularly to this publication, he has acted as a design consultant for several European synthesizer manufacturers, and was at one time the UK representative for Sequential. 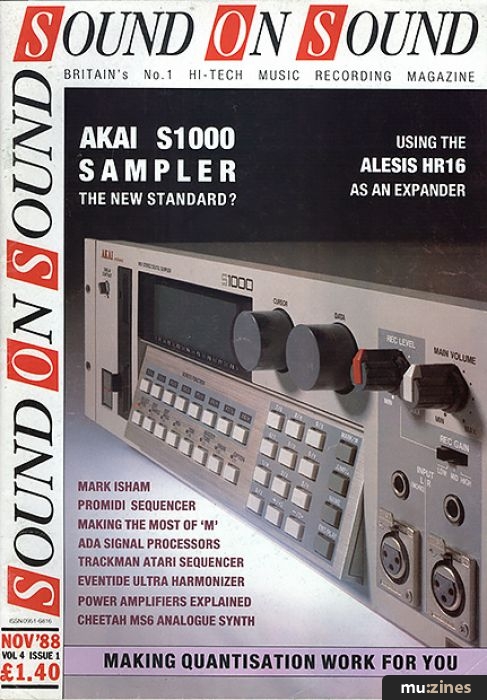