Rowland Jones mounts the soapbox this month to sound off about 'technolust'! 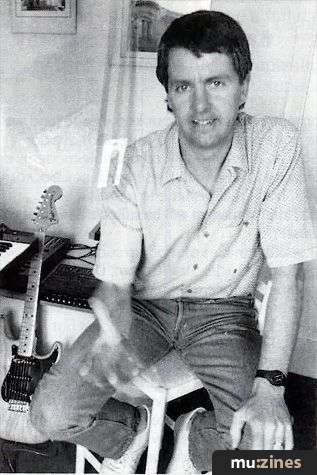 Technolust: the obsessive craving for new equipment. OK. Those of you who are not guilty raise your right hands! Right, so both of you are entirely free of this sin. In which case I can only assume that you are so disgustingly rich that you're bored with new toys. But as for the rest of you! (And me for that matter!) I find you guilty on all counts. And I don't mean just the readers of this auspicious organ (excuse the pun) but also the readers of a large number of other titles - Camera, Hi-Fi Weekly or whatever.

So how can I be sure of the endemic nature of this disease? Imagine the following scenario - you're on a train going to London, Newcastle, Aberdeen or wherever enjoying (?) a British Rail coffee (they are getting there but where and when?!). You suddenly notice your fellow traveller opening a copy of Sound On Sound, so you engage them in conversation based on your common interest. And what's the first question you ask? "What equipment have you got?" To be fair, the same thing would happen with camera or hi-fi buffs (notice nobody calls them photography or music buffs).

But, I hear you say, it gives you a starting point in conversation, a yardstick of their involvement. Well, yes and no. Drawing the analogy with photography, does someone with a 'state of the art' camera show a greater interest in photography and pictures in technical one-upmanship and knob-value? Do you really need to have the latest auto-focus, auto-metering, motor driven SLR to produce good shots, when Henri Cartier-Bresson was taking wonderful pictures in the 1930s and 40s with a straightforward (nay, basic, in modern terms!) Leica. Yes, I hear you say, but that was a high quality camera and is that really any different to using the latest SLR? Well, actually, I think it is 100% different because technolust is not about quality - it's about 'gadget value'.

Taking a deep breath after that tirade, I have to re-iterate my own guilt. Having recently written a favourable review for this magazine on the Yamaha QX3 sequencer confessing a 'soft spot for hardware', and having used my QX5 to record an album's worth of library music, what did I do next? I went out and bought a software-based computer sequencer!! But, I have to admit that this did have a major effect on my approach to writing. The flexibility which the package has given me (C Lab/Atari, if you must know) is superb, though to be honest there is still a certain amount of novelty value involved.

The point which I'm slowly (yawn!) coming to is that we are in danger of the means becoming an end in itself - forget the music, just look at those specs. You only have to look at the SOS free classifieds to see what I'm getting at: 'Brand new, boxed, hardly used' - and how many of those bargains were 'state of the art' only months ago? How many of us have home studios that were beyond our wildest dreams a few years back, yet we still crave for more?

Why do we have this craving? The only conclusion I have come to is that we all believe that the next piece of kit we buy is the one that will enable us to (a) write brilliant tunes, then (b) persuade A&R men to part with vast sums of money, and finally (c) make us disgustingly rich and famous.

I've got news for you: it ain't true! So what about a different approach? One that does not require vast sums of money.

Everybody knows that Sergeant Pepper was recorded on a 4-track, so we should all be able to at least produce acceptable demos on a portastudio, right? Apart from different levels of ability, there's one other vital detail you shouldn't overlook - The Beatles weren't just one person, it was a collection of people throwing new ideas at each other. A tape recorder may bounce tracks but it won't bounce ideas. So maybe the next item on your shopping list ought to be 'another musician'. It's an old trick but it might just work. It won't always be a load of laughs - expect the odd spate of 'musical differences'. (Take heart: in the studio after recording McCartney's 'Baby's In Black', Lennon apparently said, "Let's hear that rubbish back!" or words to that effect). Working with people is more fun and you come up with novel solutions.

"A tape recorder may bounce tracks but it won't bounce ideas."

For instance, a few years ago I was recording a soundtrack in a local studio and we needed a spot effect - a 'whoosh'. Equipment-wise, we had a DX7, TX816, and an SH101. After a futile hour trying to programme and combine sounds, we found the solution: I said 'whoosh' into a microphone, then we slowed the tape down and treated it with a Space Echo (remember them?). It worked. What more do you want?

If you're anything like me you get a buzz out of watching documentaries on old film makers, struggling with low budgets and low-tech gear, and I envy their feeling of achievement and that pioneer spirit! Yet what do we do? What we do is have 'if only' dreams about new equipment!! Why don't we just get on with making music, work with other musicians and explore some new avenues?

However, before we get to new avenues what about old avenues? How many unfinished ideas have you been storing away, promising yourself you'll finish them "one day"? (Presumably when the new synth/sampler/sequencer arrives!) A few, huh? Yes, me too. I was buying a guitar synth recently (Yes m'lud, technogluttony in the first degree) when an assistant commented on a riff I was playing. I left the shop (complete with new toy) feeling quite flattered - until I suddenly realised that I'd been playing with that idea for 14 years without even recording it!!

So that's two thoughts for '89: start working with other musicians and finish off those old ideas - they may be worth using, they may not, but unfinished they are totally worthless. Let some other musicians listen to them, see what they can add.

I was at a BASCA seminar last year when the composer of 'Delilah' and 'Green, Green Grass Of Home' was giving a talk. (Such songs may not be your cup of musical tea, but if you're so clever why aren't you successful?) He said: "Work with other people. I know you want to keep your ideas your own, but you'll stand a much better chance of success with a partner - and after all, 50% of something is better than 100% of **** all!" I rest my case. 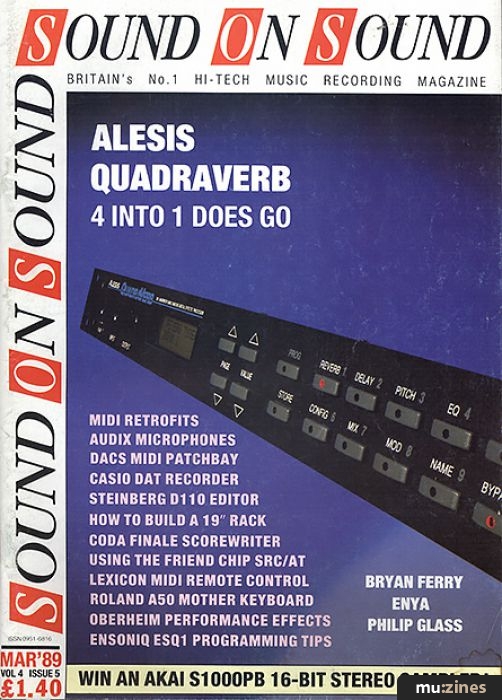