The Doctor Click is one of the synthesiser world's most comprehensive universal interface units, but its price puts it beyond the reach of most musicians. Ian Gilby examines a new, cheaper alternative from the same manufacturer.

As E&MM's monthly mailbag amply demonstrates, interfacing and sync problems are still the biggest single headache for most electronic musicians and recording engineers. Most of these problems were solved by the arrival of Garfield Electronics' Doctor Click interface unit last year, but its high price tag put it out of reach of most keyboard players. Now the same company have come up with the Mini Doc, which aims to offer all the Doctor Click's more commonly needed facilities but at almost a quarter of the price. Ian Gilby gives us a brief explanation of clock pulse standards and analyses the Mini Doc's ability to match them.

Although MIDI is currently being pushed as the panacea to all synthesiser/microcomposer/drum machine interfacing problems by reputable instrument manufacturers, it has not yet achieved that status fully. In its wake lies a plethora of keyboard devices unwittingly discarded by their owners for being problematic and incompatible with newer machines, yet whose abandonment has resulted from their interfacing facilities rather than their sound generation ability.

This incompatibility problem, of driving one drum machine from a sequencer or vice versa, has only been overcome recently by using a device such as the Doctor Click from Garfield Electronics USA (reviewed in E&MM November 83). However, this unit's £2000-odd price tag prohibits its purchase to all but the well-paid musician or studio. But just because a musician doesn't have a lot of expensive instruments, doesn't mean to say he's free of interfacing problems. If anything, he's even more likely to be beleaguered with them, and that's where the Mini Doc comes in...

Distributed in the UK by Music Labs of London, the Mini Doc seems the ideal solution to the above problem. Whereas not every player or band needs the sophistication found in the larger Doctor Click, the new Mini Doc will let you synchronise musical devices from most manufacturers, and for a vastly more respectable outlay of £525 plus VAT.

A quick explanation of musical instrument timing standards is necessary at this juncture if the existence of the Mini Doc is to be justified.

First, most modern electronic musical instruments such as drum machines, microcomposers and the arpeggiator units in synthesisers all have built-in timing generators, or 'clocks', which determine the rate or tempo at which a device runs. The definition of the timebase for each device is made in clock pulses-per-quarter-note (crotchet), but unfortunately different manufacturers (as usual!) adopt different timebase standards for the operation of their particular devices.

The LinnDrum, for example, uses the 48 pulses-per-crotchet standard, whilst Fairlight utilise 384 per crotchet. If you can't quite grasp the importance of this, then consider the following. An Oberheim DMX drum machine requires 96 clock pulses to advance it by one crotchet (or quarter-note). If you linked a LinnDrum to the Oberheim via the Clock in and outs and tried to control the Oberheim from the Linn, you'd find that the DMX drum patterns would play at half their original programmed speed, whilst the Linn would continue to play normally. In other words, the Oberheim would only advance by one crotchet (96) for every two played by the Linn (48+48 = 96 clock pulses-per-crotchet). Synchronisation of drum patterns would go out of the window.

Using the facilities available from the Mini Doc's front panel, such timing anomalies can be overcome. In the above instance, the clock output from the Linn could be connected to the correct front panel input socket specified by the timebase number - in this case 48. Apart from the 180° five-pin DIN socket for the Sync inputs and outputs required by Roland and Korg instruments, all other sockets employ quarter-inch jack connections.

You then have a choice of seven outputs, each compatible with a particular timebase and the machines that operate on that standard. These are Sync, 12, 24, 48, 96, 64 and 384, and between them cover the requirements of a vast range of products from the inexpensive Roland drum machines, LinnDrum (and LM1), Oberheim, PPG, Drumulator, and Memory Moog right up to the Synclavier and Emulator polyphonics.

So, returning to our problem. The Linn is now linked to the Mini Doc. We now take a jack from the Mini Doc output labelled '96' and plug it into the external Clock In socket on the Oberheim DMX, and that's it. It's now possible to control the DMX from the Linn directly, with no timing or synchronisation errors and no need to reprogramme the Linn's drum patterns.

What is more, if you also wanted to control the likes of a Roland MC4 and/or the step time 40-note sequencer on a Sequential Circuits Pro One synth, all you have to do is take an output from the relevant Mini Doc socket to the unit's Clock Input connection and away you go. The Mini Doc is that quick and simple to operate.

As all seven timing output sockets on the Mini Doc are active simultaneously, it's possible to drive seven different devices in parallel. Furthermore, if you use splitter leads one output can be used to drive four individual instruments requiring the same number of clock pulses, thus allowing a maximum of 28 different machines to be synchronised to one master machine. This is certainly power enough to fulfil most synthesists' needs, I would have thought.

The 'Click' socket in the centre of the front panel, for example, outputs an effective audible click on every quarter-note beat (set by the master clock on your chosen input device) providing a useful metronome that can be monitored whilst creating drum patterns. This click can be readily recorded onto one track of a multitrack tape if necessary, as a master tempo reference.

For the usual sync-to-tape requirements, any clock output can be recorded onto tape and replayed into the relevant Mini Doc input. The Mini Doc will then enable you to derive exact synchronisation of all devices from the recorded tape clock. In a recording environment, this feature alone is a godsend and makes the Mini Doc a more or less essential purchase for all studios whose clientele includes solo synthesists or groups doing a lot of synth/sequencer overdubs.

Recording a sync track on tape from one particular device without the Mini Doc would mean that only that particular brand of hardware could be resynchronised to tape at a later date, and anyone who does a lot of this type of recording knows about the problems that can be encountered when that happens.

As already stated, the Mini Doc makes light work of such tasks and relieves you of an otherwise gigantic headache, while at the same time opening up the creative scope of the recording. You could, for example, record your original tracks with a Drumulator whose timebase code has also been recorded on a spare track for syncing purposes, then erase the Drumulator parts completely, sync a Roland TR808, say, to the taped track via the Mini Doc and then re-record the new drum parts - all perfectly synchronised, beat for beat.

The final Mini Doc functions enable control of the arpeggiator facilities on synthesisers - providing that they are fitted with clock input sockets. The two arpeggiator clock circuits provide independent control of clock rate and trigger waveform polarity for two channels. Each channel has an 11-position rotary knob for 'rhythmic value' calibrated from 1, 1T, 2, 2T... up to 32, which determines the duration of the arpeggiated note played.

Effectively, this allows the user to impose some variation on the note rhythm selected from the keyboard. Thus, if you have two keyboards with externally triggerable arpeggiators and you hold down the same chord on each, by selecting different rhythmic values - eg. 4T (quarter note triplet) on Channel 1, and 8 (eighth note) on Channel 2 - two totally different-sounding arpeggios can be obtained.

A further switch labelled 'Invert' (complete with red LED indicator) adds even more flexibility to this section by offsetting the rhythm by half of its clock rate value. All manner of syncopation (off-beat) effects can be created through judicious experimentation with this switch, while quasi-echo effects can be implemented by setting both arpeggiator channels to the same rhythmic value, switching one of the channels to its inverted position. What you then hear is a stream of notes with a second group following quickly in succession - a form of single repeat echo, if you like.

That about completes the rundown of features, other than to mention the automatic reset facility provided by connecting a footswitch to the 'Start' output jack. This permits remote control of all devices connected to the Mini Doc.

Housed in a sturdy steel case that mounts in a standard 19" rack and with quick, easy access to all connections being available from the front panel, the Garfield Electronics Mini Doc would appear to be an almost invaluable tool. Basic operating instructions, as well as timebase information for all suitable products, are thankfully emblazoned on the top panel of the unit: much more practical than a spec sheet that inevitably gets lost!

I have no real criticism of the Mini Doc: quite simply, it is a superbly-made and quite ingenious device that should now be more widely available thanks to the efforts of UK distributors Music Labs who also handle the Doctor Click.

I do believe however that many more Mini Docs would be sold to the armies of up-and-coming young synth players if the price was cut dramatically. Don't get me wrong, I'm not trying to imply that the Mini Doc is overpriced for what it does. On the contrary, the asking price is more than matched by the range of facilities on offer, but it's still a shame that more people can't make use of its benefits. There are almost certainly enough potential customers ready to buy one at a lower cost to make the price reduction financially worthwhile in the long run, so how about it, Music Labs?

The Mini Doc retails at £525 and the Doctor Click at £1987, both excluding VAT. Both units are available from: Music Lab Sales, (Contact Details). 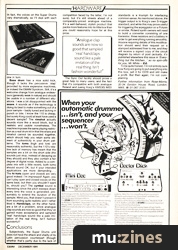