From the home organ division of the Japanese giant comes a box which wipes the floor with anything that Yamaha’s Professional Keyboards division can currently produce. Paul Wiffen reveals the secret of the black box...

From the home organ division of the Japanese giant comes a box which wipes the floor with anything that Yamaha's Professional Keyboards division can currently produce. Swallow your pride and get down to your local home organ retailer for the treat of the year. Paul Wiffen reveals the secret of the black box... 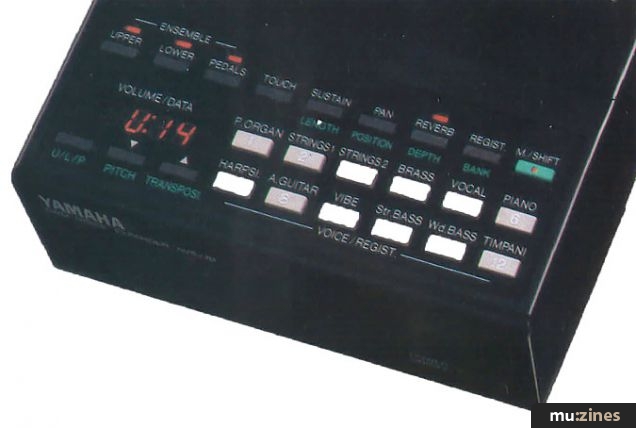 Yamaha have done it again. Last year, while the Pro dealers were struggling to sell the TX1P for £700, with its rather meagre set of piano voices, the Clavinova dealers were cleaning up with a module which housed four times as many good sounds for less than half the price. For just £299, the EMT10 featured excellent multi-sampled piano, strings, brass, choir, guitar, and basses, and if the 8-note polyphony bothered you there was a handy MIDI mode whereby two EMT10s could be linked together to give 16-note polyphony - and still for less than the price of the TX1P. Of course, there was a problem with the EMT10; all of the sounds on it were so good, that people wanted to use more than one of them at once. Even though the EMT10 was ridiculously cheap, one couldn't help wishing that it was multitimbral. Built-in reverb would have been nice, too - you know how one likes to dream.

Today, it is the turn of Yamaha's Electone division to put the Pro Keyboards side in the shade. At the British Music Fair, they showed (admittedly well hidden under a home organ) a little expander box which featured all of the best sounds of the EMT10 (plus a bunch of new ones), multitimbral operation (up to three different sounds at a time), with 16-note polyphony and built-in reverb. Its name? The AVS10 (catchy, huh?). A warning message on the back panel (no doubt planted by an envious salesman from the Pro Keyboards division) informs you that the AVS10 can only be used with Electone keyboards, but I am here to tell you that I have been using one in my home MIDI setup for three weeks now without any unwelcome side-effects. True, the AVS10 doesn't look much, but who cares when it comes packed with great sounds. Let us go through the 12 sounds that the AVS10 has in comparison with the EMT10...

For me, one of the few faults with the EMT10 was the duplication of sounds. 'Pianos 1 & 2' had no difference between them which you couldn't achieve with one twist of an EQ knob. On the AVS10, there is only one piano sound and it's all you need. I sit and play it for hours, what more can I say! Gone also are the two electric piano sounds (there are too many electric piano presets in the world as far as I'm concerned, so you won't find me crying over their loss... just wait and see what you get in their place).

The 'String' sound of the EMT10 has been augmented by two extra sounds on the AVS10. Of the three, the first is a carbon copy of that on its predecessor. The second is even more Mellotron-like than the first, and the third, entitled 'String Bass', has extra depth and richness at the bottom end, as you might expect.

The 'Brass' preset reproduces the EMT10's sound exactly, warts and all: superb above C4 for trumpets and below C2 for trombones, but sounding more like woodwind in the middle two octaves. The 'Choir', one of the high points of the EMT10, suffers a name change to 'Vocal' on the AVS10, but I'm happy to report that the sound hasn't changed a jot. Neither has the 'Guitar' preset - a nylon strung dassical/Spanish sound perfect for those Julian Bream or Paco de Lucia impersonations. 'Harpsichord', too, remains sonically identical, but on the AVS10 you can now switch off the touch sensitivity, for greater authenticity (whoever heard of a velocity-sensitive harpsichord?).

'Upright Bass' sounds as good as ever, but unfortunately you still don't have control of pitch bend on the AVS10 (just like its precursor) to do really authentic Danny Thompson imitations. As far as I'm concerned, the 'Electric Bass' and 'Slap Bass' presets of the EMT10, omitted here, are no real loss.

Of the new sounds, 'Pipe Organ' is my favourite: a full-blown cathedral organ which justifies the addition of the built-in reverb on its own. 'Vibes' sounds the same as on the TX1P (at least to my ears) and was perhaps the only sound on the Pro division product which I missed on the EMT10. And for the classical player, there are some superb 'Timpani', which was all that was missing for a convincing rendition of Also Sprach Zarathustra (you know, the Strauss piece they play when the American space rockets are taking off on TV).

All in all, the story on the sounds of the AVS10 compared with the EMT10 is one of small losses and huge gains - that pipe organ is (almost) worth the price increase alone (not even mentioning the doubling of polyphony, multitimbrality, and the addition of reverb). But this really is only half the picture.

To understand the other expansions on the EMT10 spec, you have to look at the Electone market. The AVS10 is an expander designed for home organists (no tittering at the back there, please) and, of course, they have two keyboard manuals, plus pedals. Hence the three part multitimbrality of the unit (two dynamically assigned polyphonic parts, plus a monophonic one for bass or lead lines). And although the MIDI channels default to 1, 2 and 3 (again, for Electone compatibility), they can be reassigned as you please.

Home organs are not generally played through external reverb units, so built-in reverb is the natural choice. Although preset (you can't change any of the reverb parameters), the sound quality is excellent and the reverb amount can be set by the user. No need to worry about being stuck with the reverb in the studio. One push of a button and the reverb is defeated (how many pro synths can you say this of?).

Aftertouch is also available on the Electone organs, so the AVS10 responds to key pressure as well as velocity (although this too can be defeated at the touch of a button). Aftertouch is 'hard-wired' to volume, so pushing the key after playing a note swells the volume. The twin speakers of the Electone organ make stereo playback possible, so the AVS10 also features panning. This can be set or defeated for each multitimbral part (Upper, Lower or Pedals).

The only drawback with the AVS10 is that Electones only have five-octave keyboards, so the unit will only respond to MIDI notes 36-96 (the range of 99% of five-octave synths). Master keyboard owners may prefer to stick with the EMT10 for this reason (it responds to the full MIDI note range, 0-127). However, by using the transposition feature of the AVS 101 managed to get a full extra octave out of the unit, so it should be possible for it to respond over at least a 76-note range, maybe even 88 notes, with a simple software update. The AVS10 is obviously capable of playing back these extra pitches, it is just not expecting to see them because the Electone range cannot generate the MIDI note numbers in question. If enough non-Electone users complain to Yamaha about this one small drawback, then I am sure it could be fixed in no time.

Obviously the look of the AVS10 is very 'home organ' (it is designed to be slung just below the Lower Manual of the Electone), but when you hear the glorious multi-sampled sounds it produces, this will seem a small issue. The price of £399 is exceptional (although an extra £50 for the power supply is definitely a bit steep) and I recommend it heartily.

For a year I was delighted with my two EMT 10s, but now this little box has the 16-note polyphony and multitimbrality I need all in one unit, plus five great new sounds and built-in reverb. All this for £200 pounds less than two EMT10s, and £300 less than a TX1P. Wake up Yamaha Professional Keyboards! First, the Clavinova division and now the Electone division are putting you to shame. 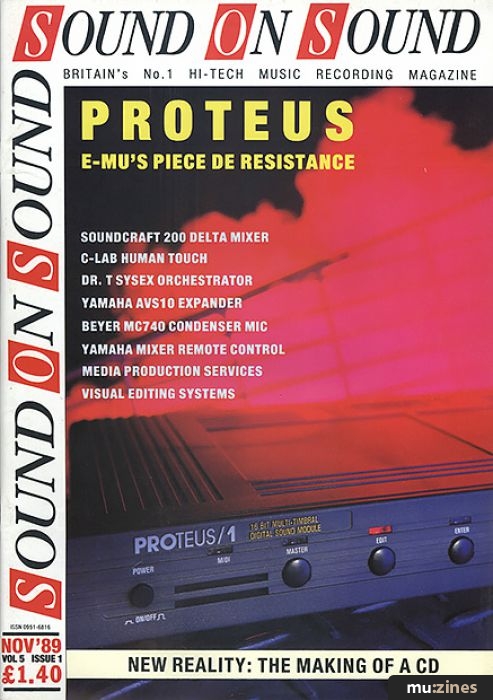