'Jack of all trades, master of none'? Tony Mills explains himself

Once more unto the breach, and another handbookless foray into the wacky world of Casio. The Japs are churning them out so quickly these days that it's a wonder they ever have time to write handbooks at all, and when the CZ-230S turned up it was so new that they hadn't even printed its name on the box.

Casio broke new ground with the digital 'vowel-and-consonant' system used on their first polyphonic keyboards, but after launching the CT-1000P came to the conclusion that a new sound generation system was needed to make programmable keyboards accessible to the average user. Disinclined to use analogue techniques (after all, their main experience was in digital calculators and watches), the company found that Yamaha's digital FM process was patented and had to develop a new system of their own.

Phase Distortion (PD) isn't a million miles from FM synthesis, but makes it easier to reproduce the analogue-like 'filter' effects often denied to FM. That's why Casio synths are a good bet if you can't make your mind up which of the other two systems (championed by Yamaha and Roland) to go for. So you'll be glad to hear that the PD combination of waveform envelopes, conventional amplifiers and pitch envelopes give massive sound creation possibilities — something you won't have to worry about on the CZ-230S, since Casio have done all the programming for you.

The problem with the user-programmable PD synths such as the CZ-101, CZ-1000, CZ-3000 and CZ-5000 is that they're a little short of memories, typically having 16 or 32 programmable spaces. If you want more sounds but are quite happy with the standard of Casio's presets, the 100 sounds on the 230S may make your eyes (or ears) light up.

In addition to polyphonic synth sounds the 230S offers a PCM drum machine section which is partially programmable. PCM is a cheaper sampling system than the EPROM-based drum machines such as the Linn, Oberheim and Drumtraks, and it also turns up on many successful machines such as the Yamaha RX range and the Roland TR range. On the 230, Casio have excelled themselves with the drum sounds, very wisely including a separate output jack which allows you to process the drum sounds for recording.

But is the 230S intended as a recording machine? With its four octaves of miniature keys, battery or mains transformer power, preset synth sounds and built-in speaker, it gives the impression of being a portable keyboard intended for fun and games or on-the-road composition. And yet it doesn't have any accompaniment (auto bass, chords or split) facilities other than the drum section.

Before returning to the drum section, let's look at the synth sounds. There are 100 sounds, roughly divided into six sections colour-coded on the front panel, and the sounds are called up by two taps on a keypad (there's also a Clear button if you enter a wrong number and want to return to the original sound).

The first 30 sounds, coloured light blue on the patch listing, cover all the main orchestral sounds: Brass Ensembles, String and Symphonic Ensembles, Organs, Choirs and so on. Most of these are very good — the strings and brass provide an excellent selection from rich, thick effects to thinner and more precise sounds.

The next 20 sounds (in yellow) are largely wind instrument sounds from trumpets and whistles to reed and harmonica, finishing with a brilliant sitar. This one takes advantage of the Casio's versatile envelope generators, as do many of the other sounds; a short note produces a synthetic twangy effect, and a longer held note bends up and down a tone. This sort of expressive effect can help to make up for the fact that the keyboard isn't velocity or pressure sensitive.

Next, 10 Pianos (in white); three acoustic pianos at different octaves, a good detuned honky-tonk, a reasonable Rhodesy electric, two very ordinary harpsichords and a rotten Clav with stacks of white noise in it, another honky tonk more like a tack piano (it's labelled Metal Honky Tonk) and a peculiar double pluck sound like a honky tonk with ADT.

On to the 20 (green) percussive/string sounds — various bells and celestes, vibes and xylophones, acoustic guitars, that famous Casio feedback electric guitar sound which is very useful, and some reasonable bass sounds.

Then 10 percussion sounds, which we'll come back to later since they can be slotted into the drum machine section, and lastly, 10 effects noises from motorcycle to typhoon to computer game and scratch effects. These sounds are all wonderful and make the machine worth a listen by themselves!

A pair of Tune controls allow you to alter the tuning of the polyphonic sounds, and apart from a main volume slider there are three main performance controls: Pitch Bend (with a sprung wheel), Solo (switched in for monophonic playing) and Portamento (switched in for glide effects). These performance parameters can be programmed for the synth as a whole (not for each sound) using small switches under the central LCD display. Hit Transpose and you can go five semitones down or six up; hit Portamento Speed and you're given a range from 0 to 99; hit Bend Range and you're given a range from 0 to 12 in semitones.

All adjustments to these parameters are made using a pair of Up/Down Data Entry buttons in the centre of the front panel, and these controls also adjust the MIDI channel from 1 to 16 after you hit MIDI, and the overall volume level from 0 to 9 of notes played from the keyboard as compared to those played via MIDI.

On the rear panel you'll find MIDI In, Out and Thru sockets, a switch to disconnect all MIDI functions, a Clock select switch to decide whether the drum machine section is clocked internally or externally via MIDI, a multipin socket for an MSX-type tape recorder to dump rhythm patterns, a 9v power input, headphone socket, and two audio outputs; PD/Mix and PCM. The first of these sockets outputs all the sounds, or just the PD sounds from the keyboard and drum section; and the second, if it's connected, just outputs the drum machine's PCM sounds.

On, then, to the drum machine section. In its preset mode it's fairly straightforward; there are 20 patterns including eight beat, Samba, Rock, Bossa Nova, Hard Rock, Salsa, Reggae, Disco and Funk, together with an Intro/Fill In button, Start/Stop, and Synchro Start from any key in the bottom octave and a half of the keyboard.

The drum sounds are very impressive, with a full Bass, slightly hissy Toms, excellent Snare, reasonable Cymbals and decent percussion sounds such as Cowbell — oh, and a rotten Clap. You can program a new variation for each pair of Preset patterns (selected with the Program button) simply by sliding the five-way Rhythm Mode switch into Pattern Memory 3/4 or 4/4.

A metronome LED then flashes (green on each beat, red on the downbeat) and any of the percussion sounds can be selected on a slider at the top of the panel and added into the rhythm. The keyboard is marked up to represent a 16-beat and a 12-beat pattern, and you simply touch the keys corresponding to where you want to hear a beat for each percussion sound.

You can also use up to four of the PD sounds, which is where the bank of 10 Percussion sounds comes in. The Simmons-type toms, metallic tambourine sounds, steel drums and tuned African Percussion add a lot to the PCM percussion effects, and you can even enter tuned sounds although unfortunately they, like the PD percussion sounds, will always come out at Middle C.

One problem, of course, is that using PD sounds for percussion steals notes from the keyboard. There is a small LED which tells you when a PD sound is coming, so you could stop playing and avoid embarrassing glitches.

Using PD sounds in the percussion section implies that the 230S can play multi-timbrally, but there seems to be no way to control this over MIDI. That's a pity, because as a cheap(ish) expander the machine would be quite a good bet.

Once you've programmed a selection of patterns you can also program a song by going into Song Memory mode and using the Pattern, Start/Stop and Intro buttons. Maximum song capacity is 200 patterns and the LCD display shows what point in the song you've reached and flashes up an 'F' sign if the song memory is full.

While a pattern or a song is playing you can mix the PCM sounds and PD sounds used in the rhythm separately, and since these can be made to come out of different rear panel sockets there's some scope for individual effects treatment of sounds.

If we have to come to some conclusions about the CZ-230S though, they would have to be fairly vague. The machine obviously represents an attempt to exploit the PD principle to the fullest, and there's no doubt that PD preset sounds are much more satisfying than the best of the old 'vowel-and-consonant' method.

The drum section of the 230S is impressive, and programmability is obviously an advantage, but it's hardly the same as having an RZ-1 or other dedicated drum machine to hand. For recording purposes, the fact that the PCM sounds are available separately is only just significant, since you still can't equalise the drums individually.

Let's suppose the CZ-230S is intended for portable composition and practise. The mini keyboard lets you out of anything too strenuous, and the lack of any accompaniment other than drums could limit the machine's compositional capabilities. Even a keyboard split would have been welcome...

As for strapping it around your shoulder — it is a little on the lengthy side, although that is a possibility. The four octave keyboard would partly go to waste in such applications, and the fact that you can't transpose sounds in octaves to get over that short keyboard is a minus point.

If you want to use the 230S as an expander, the lack of multi-timbral playing is a disadvantage, although it has some lovely big chordal effects for polyphonic playing. You could use the 230S as a cheap drum machine as long as you don't mind not being able to equalise the sounds individually, and you could use it as a compositional aid if you don't mind not having a split or auto-accompaniment facility.

Overall, then, the 230S has lots of good points and lots of pointless points. It's not overly expensive, but then again, it's not squarely aimed at any particular sector of the market. Definitely a jack of all trades, even though it wouldn't be entirely fair to say that it's a master of none... 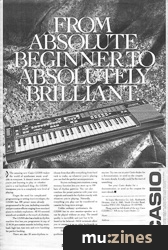 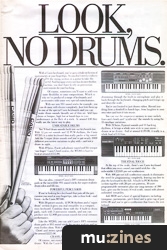