Electronics & Music Maker - Jun 1986 Getting The Most From Mono Mode

Electronics & Music Maker - Jun 1986 Getting The Most From Mono Mode

Baffled by MIDI Mode 4 on the Casio CZ synths? Paul Wiffen plots a path through one of modern technology's minefields, and explains how to get the best from it.

Casio CZ polysynths are the affordable face of digital synthesis, and boast features none of the competition can match. One of these is an innovative use of MIDI Mode 4, which allows the CZs to act as up to eight independent monophonic synths. Here's the first of an occasional series of features which shows you how to exploit such facilities to the full.

As the owner of a Casio CZ synthesiser, you rushed out and bought the SZ1 sequencer as soon as it was available, then you'll already have been able to benefit from the multi-timbral capability of your synth. Because the SZ1 sneakily accesses the CZs in MIDI Mode 4 without telling you too much about what's going on, you may well have been happily making the most of Mono Mode without even having heard of it.

First, let's take a brief look at the various MIDI Modes available. In the 1.0 MIDI spec, the four possible Modes are referred to in two different ways: very simply, as Modes 1, 2, 3 and 4, and then more expansively, as combinations of Omni, Poly and Mono Modes.

As the Poly configuration is not used in Mode 4, we'll get that over with first. A synthesiser in Poly Mode transmits and receives MIDI data on only one of the 16 available channels, unless Omni Mode is also switched on (in which case it'll bravely try to play all incoming data).

Omni Mode only affects the receive status of the instrument in question, and causes it to 'look at' all 16 MIDI channels at once.

In Mono Mode, the synthesiser assigns different voices to different MIDI channels and, provided Omni is switched off, actually divides all the machine's voice channels into separate instruments. MIDI Mode 4 is defined as 'Mono on, Omni off' - the situation I've just described.

So, when a CZ synth is switched to Mode 4, you can happily use a MIDI sequencer to get four (or eight, with the 3000 and 5000) monophonic lines running each with its separate sound program. This is referred to as 'multi-timbral' operation.

Suprisingly few synthesisers offer this facility, even though it's now over three years since the first machine to offer this capability appeared. That instrument was the Rhodes Chroma, and its multi-timbral capability was only available if you used the Chroma-to-Apple II interface.

A year later, Sequential made this facility a prime feature of their Traks system synths, with the entire family of SixTrak, Max and MultiTrak offering it as standard. They've continued this tradition on the Prophet 2000/2002 samplers, with 16 different sounds (the theoretical limit of one MIDI In Socket) all now available simultaneously.

Finally, one of the many innovative aspects of the Oberheim Xpander and Matrix 12 synths was their ability to act as six (or 12) individual voices, using the various different methods of synthesis available independently on each.

But multi-timbrality is still the exception, not the rule. And at Casio's end of the market, they're still the only people getting to grips with it.

If you're using the SZ1 sequencer, Casio provide you with all the details you need to get the most out of the combination. But if you're the proud owner of a sequencer made by another manufacturer, then the information you need may well be harder to come by.

Before tackling the channel assignment on the sequencer you're using, you need to put the CZ into the correct Mode - Mode 4. Now, the Casio synths don't implement Omni Mode, so we don't need to worry about this. All that's required is to put the CZ into Mono Mode. This is achieved by pushing the two buttons marked Solo (in the Mono area of the Programmer section) and MIDI, in either order. Make sure the LED above 'Solo' is lit. When you've done this, the LCD should be showing:

unless you've already accessed this Mode since you switched the instrument on.

The CZ is now in Mode 4. The programmer section should be showing the timbre number selected for the first of the four multi-timbral voices (V0=01), MIDI program-changes are enabled and the MIDI base channel is 1, which means that voice 1 is ready to receive on channel 1. The other three voices will be looking at the next three channels up ie. voice 2 assigned to channel 2, voice 3 to channel 3, and voice 4 to channel 4. If we change the base channel number then all the assignments will move up. For example, if you use the Value Up switch to change the base channel number (the cursor should already be under the number for MIDI CH=), then you'll see the number for the voice channel (V0=) stepping up each time you increase the base channel.

If you now move the cursor to the voice number (press the > button once so that the cursor is under the V0= number) and then use the A button repeatedly, you'll see that the display steps up through the next three channel numbers, above the figure shown by the MIDI CH= display. So by using the Up and down buttons when the cursor is below the V0= number, you can always check exactly which four MIDI channels the CZ is looking at.To change the base channel, use the < button to put the cursor back under the MIDI CH=number.

When you're stepping through the V0= numbers, the LEDs in the Programmer section show which patch is assigned to which voice. Now, you won't discover this when you access Mono Mode for the first time after power-up, as all four voices will be set to factory preset 1. Try changing the timbres on the programmer section in between changing the V0= numbers. As you step back down, you'll see the LEDs on the programmer changing to show the different timbres assigned to each MIDI channel.

And if you play the keyboard, you'll find that not only can you hear the sound assigned to the MIDI channel shown next to V0=, but that if you attach another MIDI device, the CZ is transmitting on that particular channel, program changes, bend wheel and all!

Stepping up and down, then, not only changes the sound which can be played from the keyboard, but also the MIDI channel the CZ is sending on. And should you change the channel while you're holding down a note (thereby 'losing' a note-off command on that channel and causing a drone), the synth automatically transmits an all-notes-off command as you alter the channel number.

We can now select the various timbres we want to use in two different ways: either on the machine itself, or remotely via MIDI. The former we have already looked at - you simply step up to the appropriate MIDI channel number and then set the sound for that channel, listening to your choices via the keyboard as you go. But if you change timbre whilst recording with a MIDI sequencer, you can record a MIDI patch-change instruction on the sequencer track which is controlling that channel. Do this for all the MIDI channels you're using, and when the time comes to replay the sequence (on stage, for example), all you need do on the CZ is set the appropriate MIDI channels, and the MIDI data sent through will do the rest.

What this means is that with a 'passive' MIDI sequencer (ie. one that simply records incoming MIDI data as it comes, without re-assigning channels or filtering out program-changes and pitch-bend data), you can make all the necessary set-up changes on the CZ itself. By simply switching between the V0= numbers, you can be sure that everything is being recorded exactly as you want to hear it. And when you start overdubbing the second, third and fourth parts, you'll hear the previously recorded parts played back. Several sequencers of this type are available, notably the Roland MSQ range and Yamaha's QX7 and QX21.

If you have a sequencer which obliges you to specify MIDI channels on the unit itself, you'll have to be careful to make sure that the channels you've set on the CZ match those on the sequencer. Similarly, take care that numbers correspond if you have to enter the required program-change as a number for each track because your sequencer won't record them direct from the CZ. This is not as simple as it might sound, as MIDI program-change numbers actually start from 0. Table 1 shows a chart to help sort things out. This should help you ensure that you get the sounds you want from each particular channel.

Deciding which sounds you actually use is really up to you, and a bit beyond the scope of this piece, but a typical set-up on a CZ101 might be:

Setting this up from scratch (ie. CZ power-up) entails following this procedure (the instructions in brackets are for those whose sequencer does not record incoming MIDI channel data and/or program changes):

On the CZ3000 and 5000, simply continue this procedure until you've assigned timbres for the extra four channels available. You don't, of course, need to select the MIDI channels or the timbres that I've suggested here. Just remember that to set the base MIDI channel, you need to ensure that the cursor is under the MIDI CH= number. In addition to the preset examples used above, you can use internal memory timbres or, on the 101/1000 models, even those stored on cartridge - provided you remember to insert the same cartridge when you come to replay the sequence at a later date.

The CZ series is a good introduction to the delights of mono mode, not simply because of their low price range but because their implementation is very straightforward. Other manufacturers have pushed the boundaries of mono mode further, but their innovation often makes things more complex. As we come across other instruments where mode 4 is particularly rewarding, we will run similar instructional features. In the meantime, other instruments to look out for with regard to mono mode experimentation are the Oberheim Matrix range, the Prophet samplers and also the Rhodes Chroma in conjunction with Syntech's new Chroma-to-MIDI interface (see this month's Newsdesk).

Read the next part in this series:
Mono Mode Pt2 (Part 2) 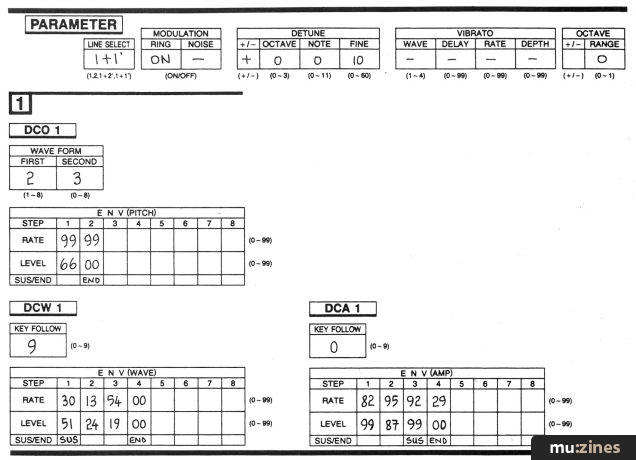 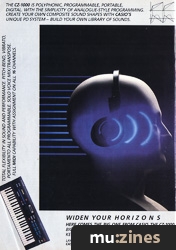 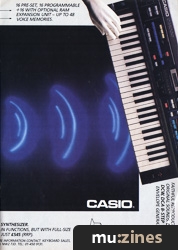