This new offering from 3rd Generation proves that spring is in the air.

With all the attention being focused on digital reverberation systems, it is only too easy to write off spring systems as outdated and obsolete - but that would be a mistake. Whilst it is perfectly reasonable to suggest that a good digital unit will outperform a spring unit in terms of both sound quality and flexibility, even a relatively modest digital unit represents a considerable investment for most home recordists, especially when you consider that the reverb may well end up costing more than a complete cassette multitrack package.

Reverb of some sort, however, is essential for most styles of musical production and the only financially viable alternative is the humble and often berated spring. This 3rd Generation product manages to fit a perfectly respectable stereo spring reverb system into our old friend, the 1U rack mounting case and very smart it looks too. Before going further, I will briefly outline the operating principles of a spring reverb system for the benefit of those readers too miserly to buy the back issues of HSR they've missed.

A Bit Of Theory

The way in which a spring reverb works is basically very simple. A helical spring is forced into vibration by means of an electromagnetic transducer which in turn is driven by a small amplifier. The drive transducer is mounted at one end of the spring and a similarly constructed transducer located at the other end picks up the mechanical vibrations and converts them back into electrical signals. Reverb is produced by virtue of the propagation delay of the spring and, because the vibrations reflect or bounce from one end of the spring to the other, the reverb decays in much the same way as naturally produced reverb.

One problem is that a given spring has it's own set of mechanical properties and these tend to make that spring emphasise certain frequencies more than others, giving rise to noticeable resonances. This can be overcome to some extent by using several springs, all with slightly different characteristics, and then adding together their outputs, which will tend to spread the resonances, resulting in a more natural sound.

Another problem, and one that is apparent to some degree in all budget spring systems, is that of less than perfect transient response. This is particularly noticeable on percussive sounds such as drums (which is a pity as drums usually come in for some pretty heavy reverb treatment) and is easily recognised as a sort of chirping twang following each drum beat. Various signal processing tricks such as limiting are occasionally used in an attempt to minimise this problem but with limited success (no pun intended), and the signal quality usually suffers in some other way as a result of this treatment.

The case against the spring reverb would seem then to be fairly strong but despite all these problems, a well designed spring unit can yield surprisingly good results at a cost well below that of a digital unit.

Back to the unit in question. I've already said that it lives in a neat 1U rack case and this is finished in a very attractive matt metallic bronze paintwork with cream legending. The device is configured as two independent mono units, each with its own set of controls, but the inputs may be linked by means of a pushbutton switch for mono (in) and stereo (out) operation. An input gain control operates in conjunction with a peak indicating LED to warn the user of impending overload and there is the option available of switching a limiter into circuit if the programme material would benefit from this extra treatment. The limiter is announced by a green status LED, and an additional yellow LED indicates that the limiter threshold is being exceeded. Next we have a variable high-pass or bass roll-off filter which is located before the delay line and covers the range 40Hz-500Hz; this is very useful for keeping troublesome low frequencies which might cause excess twanging or produce a muddy, cluttered sound out of the delay line.

Finally we have the reverb level control, which affects only the reverb content of the mixed output and has no effect on the direct output.

Round the Back and Under the Lid

All inputs and outputs are at line level and are accessible on both standard jacks and XLR connectors, all unbalanced. Each channel has its own input, reverb output and mix output, though you need only use one input socket if the front panel switch is set to mono. A ground lift switch, complete with security locking plate is located next to the IEC mains inlet socket and the fuse value is clearly marked (even if it does read 500Ma instead of 500mA). And of course, there is a block diagram of the whole system on the lid.

Except in this case, the lid is the bottom cover. The inside of the unit is neatly set out and low noise ICs are used throughout the circuitry; a pair of Accutronics 8" triple spring lines comprising the heart of the system. In order to minimise electromagnetic pick up on the sensitive moving coil transducers, the power supply is partitioned off from the rest of the electronics by means of a steel screen, but the transformer is quite conventional - not a torroid which would probably reduce pickup even further.

When testing a reverb unit, the first thing I go for is my trusty Drumatix which is absolutely guaranteed to bring out the very worst in any reverb system. The bass drum is not really a fair test and very few people would wish to use reverb on a bass drum anyway so being a good sport, I turned the bass drum down. The hi-hats showed the GR2 to have a good bright sound which is essential for modern production and the snare gave similarly good results but with a noticeable degree of 'flutter' which continued for the best part of the decay period - around three seconds. The bass roll-off filter helped to reduce this effect but was not capable of eliminating it. The dreaded twanging on the other hand turned out to be well under control and decayed quickly, though it was of course still noticeable at all but the lowest reverb settings. With vocals or with other instruments, these side effects were minimal, resulting in a sound that was bright, warm and generally flattering as well as having a usefully long decay time.

Using the limiter did surprisingly little to reduce any of the unit's side effects and only succeeded in imparting a somewhat stifled or lifeless quality to the sound; I tended to end up not using them after after first giving them a tentative try.

Noise is often a problem with spring units due to the very small signals involved, but the use of low noise ICs has payed off here as the residual hiss is very low. Pickup from the mains transformer is however apparent at high reverb settings and this takes the form of a low buzz. This wouldn't be serious (or even noticeable) for most home applications, but could present problems in a commercial studio if high levels of reverb were required.

In terms of its stereo effectiveness when fed from a mono source, the GR2 worked well in giving a wide, spacious image. Though the two spring delay line units are ostensibly identical, slight mechanical differences ensure that the left hand channel always sounds slightly different to the right and it's this difference that produces the illusion of a stereo effect. If this unit is to be used for live performance, (remember live performance?) bear in mind that all spring line devices are susceptible to vibration, and tripping over the unit when it's plugged into a 10kW PA system is likely to sound like a Vogon battle cruiser making a forced landing in a dustbin factory!

This is not the ultimate reverb device, not even the ultimate spring reverb device, but at a RRP of around £227 inclusive of VAT, the 3rd Generation GR2 offers a good, basic reverb within financial reach of all but the most impoverished recording enthusiasts.

Personally, I found that the limiters were somewhat superfluous, but you can always turn them off if like me, you don't want to use them. The noise performance is good by semi-pro standards but the use of a separate power supply unit could have significantly improved this situation as most of the residual noise is in fact hum pick-up from the transformer and associated mains wiring. The use of a variable bass roll-off filter in a unit of this price is a welcome surprise and my only real reservations concern the intensity and duration of flutter evident when processing percussive material. Nevertheless, given its cost, only a misguided optimist would expect perfection.

The final verdict? Well, it's not an AMS but it does the job, it's well made and it won't make outrageous demands on your budget.

It's All Done By Planning 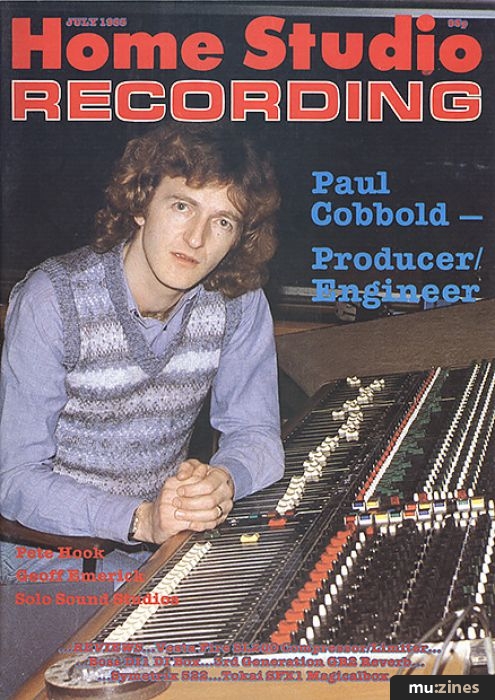 > It's All Done By Planning