Akai are quickly becoming the name to look out for when it comes to hi-tech products (their hi-fi's not bad either!) and this keyboard-based successor to their S612 sampler certainly reinforces that opinion. Julian Colbeck checks out its attractions.

Akai is rapidly becoming the name to look out for if you're in the market for a sampler. While other Japanese companies - relative newcomers to the world of sound sampling - are still on their first or second attempt, Akai are busy launching their third sampler (coupled in fact to a fourth, the S7000 module). Julian Colbeck sees where it fits in.

Although the X7000 is Akai's first complete sampler - complete with built-in disk drive and keyboard that is - it strikes an interesting balance between their previous sampling instruments, the ground-breaking S612 and the much acclaimed larger model, the S900.

One obvious similarity with the S612 is the fact that it uses 2.8 inch disks, and, although the X7000 is capable of storing considerably more information on disk than its predecessor, sounds sampled and stored on the S612 can be happily fired up here. (Due to the X7000's ability to store program data on disk the reverse, sadly, is not possible.)

But in terms of using the instrument - sampling, manipulating, and playing sounds - the X7000 has capabilities and, to an extent, specifications that remind one more of the S900: 40kHz maximum sampling rate, program data storage on disk, multi-sampling and re-sampling capabilities, and a very up-market MIDI spec.

That said there are still limitations, most of which revolve around the limited storage space that 2.8 inch Quick Disks offer. Though cheap, and reasonably cheerful, this format is still somewhat labour-intensive since it entails a considerable amount of loading and re-loading and general faffing about in order to gain access to a number of different samples at a time. And in this respect the X7000 is no better or no worse than Roland's equivalent instrument, the S10.

Dressed in battleship grey, as are all Akai Professional items these days [must be a sign that they're declaring war on the market - Ed], the X7000 has clean lines and, with a healthy number of dedicated parameter buttons (Start, Loop, End, LFO Speed etc), would seem to be easy to figure out.

And so it is, eventually, but at first I think many people, especially those unfamiliar with sampling altogether, will come unstuck since the opening chapter of the owner's manual simply launches into the business of user-sampling without explaining how to access and use the factory disks. Seeing as the X7000 is priced at an 'introductory' level (£999.99), this seems a little unwise.

Anyhow, the X7000 arrives with three factory disks all of which are, in fact, a grand piano sample (although to my ears an acoustic guitar crept in there somewhere), and to access this wodge of multi-sampled data you must load all six sides, one after the other: insert-load, insert-load, etc. Sorry to be so specific but the manual sees fit not to explain this point clearly.

Now, with these six samples safely loaded into the X7000 together, you have at your fingertips some 32 programs - which comprise combinations (splits or layers) of any of the said six samples, complete with sundry key transpositions, filtering, vibratos, output levels, and what have you, all stored on disk. These factory disks come with just eight such programs written so you have a further 24 programs free in which you can store (at least temporarily) your own attempts at mixing, matching, and editing. This is probably the best way to learn your way around the instrument.

Although not really complicated once you've memorised the procedures, the X7000 will take a bit of time to learn. Most tasks are ultimately self-explanatory thanks to there being a number of dedicated parameter control buttons on the front panel.

First, however, you must select a sample you want to work on, which does entail a fair bit of prodding and twirling of the large master control knob which protrudes from below the display screen.

"One obvious similarity with the S612 is the fact that it uses 2.8 inch disks, and... sounds sampled and stored on the S612 can be happily fired up here."

Although the manual seems to suggest that you launch straight into sampling your own sounds, I'd strongly recommend an hour or so on the factory disks before you attempt it.

Moreover, if you do, I guarantee the X7000's system of sampling will seem like a doddle. The initial procedures are pretty much standard: setting of basic pitch, setting the playback bandwidth (variable from 1.6kHz to 16kHz), setting the record and trigger levels... and, basically, off you go.

The potential sound quality is excellent. At 16kHz bandwidth you're most certainly approaching 'pro' waters, although your sample length, of course, is now minimal. Less than a second, in fact. Further down the scale, at around 8kHz, you're still dealing with usable quality sounds and, with a sample length now of a few seconds, this seems to be the optimum area for day to day work. Although the X7000 screen displays the bandwidth it doesn't show sample length, which would have been helpful.

For some reason Akai have placed the Record Level knob on the rear panel, just above the mic and line jack inputs. This seems odd, and a little out of character for this otherwise essentially helpful instrument.

Having made your sample, you are still at liberty to change the pitch and bandwidth before getting on with the business (if desired) of looping.

Looping is the danger area of sampling and Akai have done very well here to make this task as simple and straightforward as possible on the X7000. You can create a loop manually, carefully tweaking the five-digit number displayed on screen until a satisfactory result is achieved. But personally, having tried the auto-loop system on the X7000, I'd never look elsewhere. It's superb. Even what I imagined to be unloopable-at-all samples whizzed back to me, smooth and uninterrupted.

On the other hand, you may simply want to lop off a portion of sound from the beginning or end of your sample - again an easy matter of pressing, say, the Start button, and using the large master control knob to scroll through the five-digit number on screen until whatever offending bit has been despatched.

Having fashioned your sample into something listenable you may want to fine tune some aspects: add some vibrato, make it brighter, extend the (or more likely create some) release time. Again, this is a very simple matter of pressing the relevant button (Release, Filter, LFO Depth...) and noodling around on the master control knob until you hear the effect you want. You don't even have to press Store or anything, just move on to your next task. The range of editing parameters is certainly not vast here, but it is sensibly curtailed.

"In MIDI terms the X7000 is stuffed to the gills. Just when you thought you'd got the hang of the four basic MIDI modes, along come Akai with no less than nine..!"

Here endeth the rundown of the X7000's basic range of sampling and manipulating features. There's a lot more to come...

Having sampled a sound there are several available options aside from the basic looping or trimming: you can scan loop for a start, which means a sound can be quickly set to loop a portion of itself only. The manual illustrates this using the 'Good Morning..ing..ing..ing' technique. Quite so. But you can also programme'Good Morning..gni..ing..gni' as well. Get the picture? The same scan mode also selects Drum Trigger, whereby an entire sample will play back even on receipt of a short pulse, say from a drum machine or snare beat. Such features are not new, but Akai have made them quick to obtain and easy to understand. Full marks for that.

In MIDI terms the X7000 is stuffed to the gills. Just when you thought you'd got the hang of the four basic MIDI modes, along come Akai with no less than nine modes to get bogged down in. Gulp! The soon-to-be-famous five newcomers are Akai specialities, of course, and most relate to (again) Akai's own 13-pin DIN connectors which are found on most of their recent Professional gear.

If you don't own any of this recent equipment then you don't really need to worry about the extra modes. The regular Omnis and Mono (2) are, I trust, familiar to ya'll. Mode 4, the Mono mode allowing each voice in an instrument to be linked to their own MIDI channel number, comes under the control of the 13-pin DIN connector though, so Akai are obviously keen you remain brand-loyal if you're into multitimbralism.

The remaining five modes are only available on the X7000 and comprise Special Mono (Omni On/Off), and Multi-program Polyphonic/Monophonic/Special Mono. Their purpose primarily concerns the linking up of samples and MIDI channel numbers for use with sequencers, or MIDI pad triggering, and I'm afraid their individual applications would take me a month to figure out and even longer to explain.

In a nutshell, the Akai X7000 is a versatile sampler. Once you have the system down most should be able to execute sophisticated work in less time than on some other machines. I don't particularly like the keyboard, which though velocity-sensitive is light-actioned, flimsy, and has been inserted leaving a damn great gap between it and the rest of the casing (where dust and general rubbish is sure to accumulate), but so long as you're careful, or alternatively MIDI it up to another keyboard, the workings of the instrument itself make the X7000 a highly attractive proposition.

To be fair, this is a more advanced sampler than the Roland S10 which is an almost exact competitor in price terms. You can do more, sample more, and of course get lost more. But it doesn't quite seem so well made as the Roland and nor perhaps is it quite so easy to operate for the novice or sampling-scared.

But the X7000 deserves to, and surely will, do well at this price. For those who have some knowledge of sampling and who are, perhaps, keen sequencer users or general experimenters, this instrument offers enormous scope for relatively little money.

Peter Gabriel - Behind The Mask 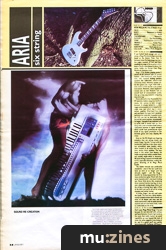