One of the most refreshing synths of '89 was Ensoniq's VFX, but how does it fare with a new keyboard, disk drive and a powerful onboard sequencer? David Bradwell looks at Ensoniq's workstation.

WHEN THE VFX was reviewed (MT, June and July '89), Simon Trask was particularly enthusiastic in his praise for the most innovative new synthesiser of the year. The Japanese weren't too thrilled because at long last something was threatening their domination of the industry - not just threatening, but poised to take the market by storm. The one ray of hope left for the East was that the VFX was a pure synthesiser - no sequencer, no drum section and therefore no fashionable "workstation" tag.

Enter the new Ensoniq VFX-SD, where the "S" stands for sequencer and the "D" for drums. The VFXSD carries the same basic sound character as its sister, but adds a host of new features like a disk drive, a 24-track sequencer, four new effects, a range of drum sounds and an extra pair of audio outputs. System Exclusive storage is available, thanks to the sequencer and disk drive, and the whole thing is polished off with a new keyboard which is set to become standard across the whole Ensoniq range. How are the Japanese taking all of this? Only time will tell.

The sequencer is the first obvious change from the VFX, and is certainly the most impressive of the new features. To begin with, it's the only built-in sequencer to offer as many as 24 tracks, rivalling, so Ensoniq claim, the flexibility of software-based systems. Now I'm on very close and friendly terms with my Atari, and I'm therefore wary of losing a large monitor, graphic editing and the instantaneousness of the computer. I'm also a bit sick of the bugger crashing, and so dedicated hardware sequencers have recently attracted my attention. The VFX-SD sequencer is contained in RAM, and so can be updated from disk as easily as loading a new sequence. And it's true to say that it offers many of the editing facilities normally associated with soft sequencers.

A Sequence on the VFX-SD is a collection of 12 independent Tracks plus an effects program. The length of a Sequence is determined by the length of the first Track you play, although this can be changed at any time. Sequences are assigned to play consecutively in any order in Song mode, with up to 99 Steps and 99 Repetitions of each Step. Within each Song Step, individual Tracks within the Sequence can be muted or transposed. After a number of Sequences have been completed and linked together to form a Song, you have another 12 linear Tracks which run the entire length of the Song. Editing features include the obvious ones like transposition, quantisation, copying, deletion and insertion, as well as more sophisticated functions such as filtering, scaling and time shifting. A complete Event-list is also available.

The drum sounds appear on screen as patches in kit form like any other sound, rather than being confined to a section of their own. Unfortunately, due to the limited time during which I had access to the VFX-SD (it was the only one in the country at the time) I didn't manage to delve too far into the realms of drum kit programming, but it's enough to say that the sounds themselves are extremely impressive - as you'd expect.

The VFX-SD also contains two wave classes not found in the VFX: Drum Sounds, which contains 17 individual drum sounds, each presented as a single wave covering the entire keyboard, and Multi-Drum which contains multisampled combinations of the above waves and the original VFX Drum and percussion sounds. Drum sounds always benefit from judicious use of effects and having a built-in multi-effects unit has done those in the VEX-SD no harm at all. Incidentally, in addition to all of the effects found in the VFX, the VFX-SD has several new effects included Gated and Room Verbs, Dirty-Roto and Delay, and Warm Chamber. For a detailed explanation of the other effects and the way in which effects are routed in the VFX, consult the review in the July issue of MT.

Next up is the keyboard. Ensoniq have a history of problematic keyboards - due to their insistence on availing their public of poly aftertouch. The new VFX SD keyboard, by way of a contrast, is a joy to play. Ensoniq claim it is close to the feel of an ESQ1 (remember them?) but also capable of generating two types of aftertouch - Poly-Key and Channel, that is, either polyphonic or uniform across the keyboard. Poly-Key pressure generates loads of data via MIDI, and can be turned off to conserve memory when using a sequencer.

The cost of all of this? Well, apparently some samples have been lost to make way for the drum sounds. Also, a considerably enhanced specification carries a considerably enhanced price tag, but that's just the way of the world. The original VFX still stands up as a synthesiser, possessing some of the richest and most breathtaking sounds available. But if you're after a workstation and the thought of an external sequencer leaves you cold, the VFX-SD could be just the winter warmer you need... David Bradwell 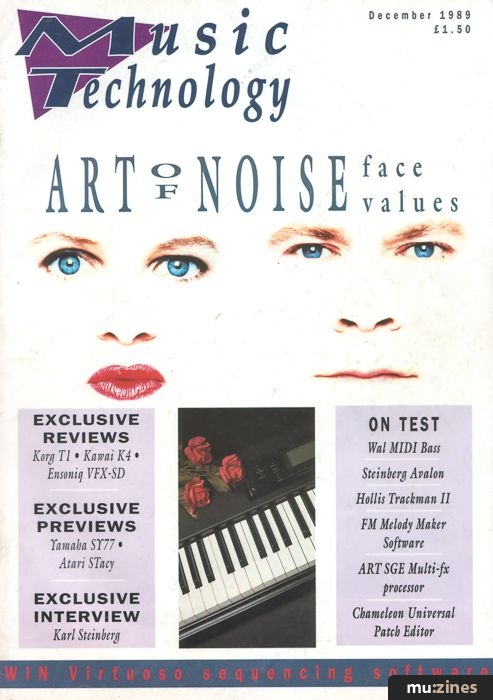 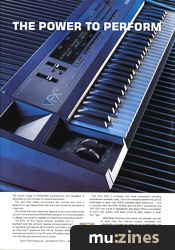 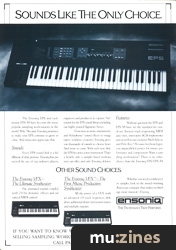