Both electronic and traditional musicians often have the same problem: playing in time. In recording studios, where electronic integration is high, musicians — usually drummers — are often required to record their parts while simultaneously listening to a click track, an electronic blip in their headphones. Non-studio musicians, on the other hand, often use a metronome during personal practice, which can also be a drag. There is now an alternative: Q-Logic's MIDI Metro is a stand-alone or MIDI-driven visual timing aid that has applications at rehearsals, in the studio or on stage.

The Metro is mounted in a traditional 1U-high 19-inch rack, has a central four-character LED display, a four-button control panel (start/stop, parameter value up and down and function select) and a collection of eight multi-coloured lights arranged symmetrically outwards from the centre. When working, the two largest, red lights, flash alternately on the beat, while the smaller, outermost green and yellow lights flash as sub-divisions of the beat. This flashing provides a visual analogue of a conductor's arms waving around — you'll know what I mean when you see one working. A remote socket on the front panel allows the Metro to be stopped or started by a footswitch, and units are supplied with either internal or external power supplies — the choice is yours.

When using the Metro as a stand-alone device, you can select any tempo between 40bpm and 240bpm, and assign any time signature you like between 1/16 and 32/16, with 4/4 as a default. In this mode, the MIDI Metro also acts as a MIDI master clock and could drive your sequencer. When used as a slave to the MIDI clock, the tempo follows the master, although it does tend to behave a little erratically when the master tempo approaches 40bpm or lower. In either case, the central display reads out the tempo or bar number. Incidentally, I found that the tempo was consistently displayed as 1 bpm less than one of the sequencers I used as a master clock, but this should be nothing to worry about.

Other parameters include a bias setting that allows the light pattern to be retarded or advanced in relation to, but independently of, the tempo, and is used to adjust the 'feel' of the pattern — use it if you find yourself consistently ahead or behind the beat. A facility not included is one that allows bars with different time signatures (or tempos) to be programmed. For the majority of users, this won't be a problem, and might not have been a cost-effective option, but I still missed it. When using a sequence with a complicated structure, the tempo changes where necessary and the actual flashing for the most part keeps to the overall beat, but if a piece is moving about between odd time signatures (5/4 to 4/4 to 7/8 for example), the bar display ceases to be relevant.

For those who have experienced playing with a click track, the MIDI Metro will be a huge relief. The rest of the recording process will also be improved — no click bleeding through on tape tracks or on headphones. Using the Metro allows the musician to play more naturally, since it seems easier to concentrate on the flashing than a click while playing.

Small or large ensembles of musicians could use the Metro as a tempo guide for rehearsals. It won't take the interpretive place of a conductor in larger groups, but duos, quartets, septets and so on which don't normally use a conductor will welcome the subtle time reference offered by the MIDI Metro. Gone for good is the annoying ticking of a metronome.

Q-Logic have produced an exceedingly useful — not to say unique — tool that has valid uses for a wide range of performers, and at £239, this British product is not too expensive. If you're fed up with metronomes or click tracks, you owe it to yourself (or your drummer) to try one out soon. 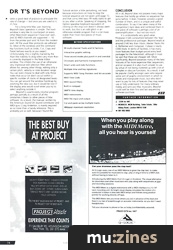 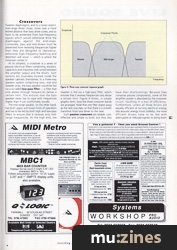