Contour your instrument envelopes with this versatile effect unit

★ Exciting Effect For Guitar, Keyboards And Even Drums
★ Control Over Attack And Decay Regardless Of Original Instrument Envelope
★ Unique Punch Control For Really Percussive Sounds
★ Powered From The E&MM Twinpak, Or From Batteries

No, this is not just another envelope shaper project! The Shaper is an exciting new effect for the experimenting electro-musician who doesn't want to sound like all the rest. It allows the musician to gain complete control over an instrument's envelope shape, regardless of its natural envelope. Not only can the attack and decay characteristics be controlled, but the aptly named punch control also provides the musician access to an exciting range of percussive sounds normally only associated with expensive synthesisers.

Apart from the obvious application for guitars and organs, the Shaper will add new life to a synthesiser that has limited envelope shaping facilities. The recording drummer could find the shaper invaluable, where the punch control can provide plenty of slap. Cymbals, too, can be cleaned up with The Shaper. Guitarists will find The Shaper useful as a super-sustain unit, but without all the noise problems normally associated with sustain compressors.

Although the E&MM Twinpak (September '82) is recommended as the source of DC power, a pair of PP3 batteries will provide quite respectable operation.

Figure 1 shows the complete circuit diagram for The Shaper. After being buffered by IC1a, and amplified by the variable gain stage IC1b, the input signal applied to JK1 eventually reaches a very tight compressor formed by IC1c, IC2a&b and TR1. When the input signal level is very low, the gain of IC1c is very high, determined by R4. As the input signal level increases, the signal at pin 10 of IC1c will increase in level until a point is reached where the base to emitter junctions of IC2b start to conduct, causing current to pass through R9 into C4. The current now flowing through R10 into the emitter of TR1 will cause it to conduct current via R11 into half of the operational transconductance amplifier, IC2a. The increased negative feedback around IC1c caused by the increased transconductance of IC2a now reduces the gain of IC1c such that regardless of the input signal level, the signal appearing at pin 10 of IC1 is always kept at an essentially constant level.

IC1d acts as a threshold level detector, monitoring the current flowing through R11. If the signal presented to the compressor section is within the compression range of the unit, then IC1d pin 12 will switch negatively, signifying the start of the attack period. C6 will now charge via D1, R15 and RV3, the attack control. When the signal level falls below the threshold, signifying the start of the decay period, IC1d pin 12 switches positively, discharging C6 through D2, R17 and RV2, the decay control. The envelope voltage thus generated on C6 is converted into a control current by TR2. This current is used to determine the gain of the current controlled amplifier IC2c. The control envelope generated on C6 is thus impressed on the constant level signal at IC1c pin 10.

When IC1d pin 12 switches positively at the start of the attack period, a voltage pulse from C5 is developed across RV4, the punch control. A controllable portion of this pulse is added to the start of the envelope voltage via D4. During the decay period, D3 ensures that C5 is fully discharged, ready for the next punch pulse. The input signal level required to reach the threshold point is adjusted by means of RV1. The threshold detector exhibits some switching hysteresis determined by R14. This prevents erratic switching, which could otherwise lead to multiple punch pulses, or punching during the decay of the input signal.

Construction begins with the PCB assembly since most of the parts including the potentiometers are mounted on the board, there is very little wiring to be done. The PCB should be populated according to the component overlay, shown in Figure 2, in discrete stages as follows: The first stage is to insert from the track side, and solder, the five Veropins. Next insert all the resistors, bend the leads out at 45 degrees to secure and after soldering, trim the leads flush with the joints. The next stage is to insert, solder and crop the capacitors in a similar manner. Take care with the orientation of the electrolytic types. The IC sockets can now be inserted and soldered, but don't put the IC's in yet. Now insert, solder and crop the transistors and diodes, again being careful with orientation.


After preparing the aluminium panels as shown in Figure 3, insert the pots loosely into the PCB, but don't solder them at this point. Offer the pot bushes into the front panel and secure with nuts. After ensuring that the pots are square to the PCB, solder them in place. In this way, no strain is put on the joints. This completes the PCB assembly, so it is now time to check it thoroughly; firstly on the component side for completeness and orientation and, preferably with an eyeglass, on the track side for any dry joints or bridged tracks. If all is well, load the IC's into their sockets, taking the usual care with orientation. After mounting all the DIN and jack sockets on the two panels, they can be slotted into the case base. It is now quite a simple matter to complete the inter wiring as shown in Figure 4.

If you are using the E&MM Twinpak, connect it to one of the DIN sockets on The Shaper. The other socket can be used to extend the DC power on to another audio processor. The Shaper consumes about 15mA from a twin 15v supply. Now switch on, plug your instrument into the input, and feed the output to your amplifier. The Shaper's output will be in the region of 200mV regardless of the output level of your instrument, so the high level input of your amplifier should be used. If The Shaper's output level is found to be conveniently high, then R24 can be reduced in value as required. Another modification may be found necessary if The Shaper is to be used with a bass instrument: increasing C4 to 100uF will prevent the low frequencies from causing a second punch pulse to be produced as the signal decays through the threshold point.

The Attack and Decay controls alone provide a very wide range of effects, from reverse playing when the Attack is clockwise and Decay anticlockwise, through violin bowing effects with both controls clockwise, to sharp on-off sounds when both controls are anticlockwise. The punch control introduces varying degrees of percussiveness to the sound, ranging from string picking to a full blooded 'slap' when the control is fully clockwise.

For a punch to occur, the signal must first decay through the threshold level, so careful setting of the threshold control is required if punch is used on fast runs. Although the Threshold pot controls the gain of the input stages, its real function has very little to do with signal levels. This control determines the point at which The Shaper starts its decay cycle. It will also have a significant effect on the sustain time. If a very long sustain time is required, then the Threshold control will need a high setting. Too high a setting, though can lead to distortion so some care is needed. Also, it should be obvious that The Shaper is not capable of providing a long sustain and decay on an input signal that has a very abrupt decay. The shaper is, however, capable of considerably extending the decay time, and of providing a long, steady sustain that guitarists will love, particularly considering the absence of any noise problems when a supposed silent period is reached.

The recording drummer will find that The Shaper can transform drum tracks, the punch control being very useful for providing that extra kick. Bear in mind though that unless you use more than one Shaper, predictable results can only be obtained when one drum is shaped up at a time; on the other hand where is your spirit of adventure?

A complete set of parts for The Shaper including case, screen printed front panel and hardware is available from E&MM, (Contact Details), at a cost of £24.95, including P&P and VAT. Please order as: Shaper Kit. 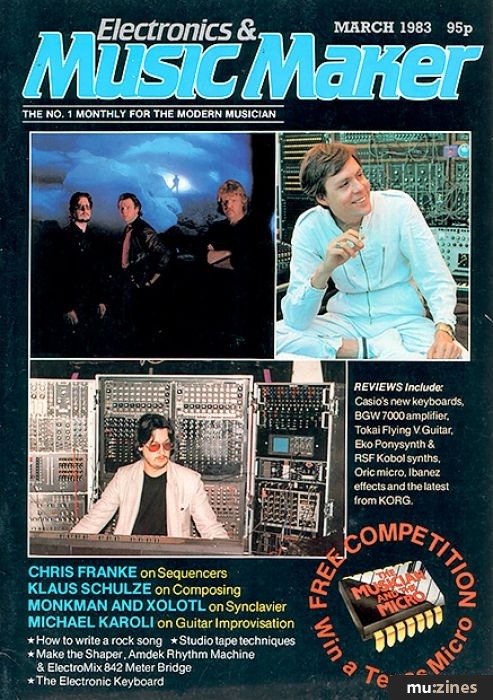