A budget reverb unit for budget studios - although big studios might like it too. John Renwick plugs it in and gets a pleasant ringing in his ears.

The novelty of cheap digital reverb is wearing off; manufacturers are now starting to worry about the quality and facilities of their wares.

THERE'S NO DOUBT that, after a good song and some good musicianship, nothing makes a more professional demo than the outboard effects units used. To some extent, all recording tries to emulate the live situation; yet the ideal recording area is by definition "dead". And not only is it acoustically unresponsive, it is without the feedback of a live audience. The way we try to substitute for this missing ambience is with intelligent use of space-simulating effects such as delays and reverb.

Ancient tape-loop delays were superseded by cheap digital devices some time ago - although it's still possible to pick up a second-hand Watkins Copycat if you really feel the need - and it's only over the last year or so that technology and demand have made digital reverb really affordable.

THE FUNCTION OF a reverberation unit is to recreate a feeling of space. The natural acoustic qualities of a small room, a large hall or a stairwell are completely different, made up of reflected sounds of different delays and overtones. Simulating these acoustic qualities is complex, and until recently, has been an expensive business.

I say recently, as there is a growing number of affordable digital reverbs appearing in the adverts with each passing month. Currently making its debut is Akai's EX90R, and in keeping with the competition it's affordable, versatile and of excellent quality.

The EX90R is the latest unit in Akai's successful microrack series. Since the first of the EX line of effects began to appear, a reverb unit has been something of an inevitability. Fortunately, rather than jumping in feet first, Akai have waited, assessed the opposition, and produced a unit which many musicians will probably come to regard as the best choice available.

While the original Alesis MIDIverb caused quite a stir, the launch of the company's cut-down Microverb demonstrated that there was a demand for an even cheaper reverb. However, with the EX90R, you don't have to sacrifice control or flexibility to save money - this is a fully variable unit. Unless you're one of those people who prefers to have their options limited by presets, I'm certain the opportunity to tailor reverb effects to your precise requirements will more than make up for the inconvenience of the EX90R's limitations - no preset effects, MIDI control nor programmability.

THE EX90R IS a 1U-high, half-width box consistent in styling with the other Akai EX series effects. Using an adapter, you can mount two EX units together in one 19" rack space. This makes the device suited to rack or table-top working - and ideal for most small studios.

The EX90R requires an external 12V power supply; don't try to use an unbalanced one, or you'll get an annoying low-level hum. There's a mains switch on the back, and the effect can be switched in and out either with a normally-closed footswitch using the rear ¼" socket, or using a switch on the front panel. A nice touch is that the effect decays naturally when you switch it out, rather than cutting off dead.

Two of the functions evident on the rear panel immediately put the Akai ahead of superficially similar units such as the Roland RRV-10, also a £199 half-unit reverb. The Akai boasts stereo inputs and outputs on ¼" jack sockets; if you don't want to use both, just Input one and Output one will deliver the treatment in mono. You can even use a mono in/stereo out setup, to provide a spread reverb without losing the directional location of the source. The second intelligent inclusion is a pair of effect loop sockets, again on ¼" jacks. Using these, you can pre-effect the signal going into the reverb. This could be useful for doubling-up effects if your mixer has limited effects sends, but its main application is to allow you to use a graphic equaliser to trim the input signal.

THE FRONT PANEL boasts seven control knobs, which should give you some idea of the versatility of the device. The first control is the overall input volume. This is accompanied by a red LED peak warning indicator. The Akai is happy with levels from -35 - 0dBV, so it should work happily with practically any signal you care to throw into it.

Next along is the Main Mode switch. Like the aforementioned Roland RRV-10, the Akai has a set of main algorithms programmed into it, which you then modify to suit your requirements. The algorithms simulate the reflective properties of different environments, emphasising certain frequencies and delay times to create widely varying effects. There are also two special modes which allow you to create some of the most popular and complex studio sounds quickly and easily.

The first mode, 'L Room', creates, as the manual informatively states, the effect of a "large room" - although I think most of us had figured that one out for ourselves. Gate cuts the envelope of the reverb effect before it decays naturally, giving that popular Phil Collins treatment to your drum sounds.

'S Hall' is (yes, you guessed it) a small hall, and 'S Room' is a brighter small room. 'Plate' simulates the still-popular analogue reverb sound, particularly suited to keyboards since it has a wide tonal range, while 'Reverse' employs a backwards envelope which can create some unusual, useful and frequently familiar effects.

If it's a truly massive sound you're after, the deep 'Large Hall' setting emphasises the middle and low frequencies, and the equally impressive 'Loft' gives an enhanced stereo spread.

Further along the front panel we come to the Decay control. This determines the length of the reverb decay or, on the Gate setting, the time before the gate cuts the effect off. Both of these are supposed to be variable from one to 15 seconds. I can't understand how Akai came up with the second figure; I couldn't create a 15-second reverb on any setting, but I'll concede that the maximum time is quite long enough for any sensible use.

Next along is the High Cut Filter, which is more than just a tone control. It is actually a 1-16kHz 20dB/octave filter which, let me assure you, is capable of drastically altering the frequency content of the effected sound from the sharpest, brightest smack to the most mellow swoosh. Definitely one up on the preset units, where the inability to fine-tune the tones of the preset effects soon becomes very frustrating.

Dry and Effect level controls complete the front panel, with the exception of the power and effect LEDs and the effect on/off switch. Surely no explanation needed here.

Complete, that is, except for one of the most important knobs on the EX90R. The control in question is the Predelay - the amount by which the actual effect can be separated in time from the incoming signal. Notably absent on all the other units mentioned so far, the pre-delay is variable from 0.01-200 milliseconds, and allows you to create effects on the EX90R which have been unavailable before now on any effects unit in this price bracket. Rather than being limited to "rooms", "halls" and "lofts", the manual points out that you can now create "churches", "caves" and even "closets" by judicious use of pre-delay. Bear in mind, though, that it's quite easy to create quite disgusting noises by twiddling the knobs while a sound is playing. In live use you'd be well advised to kill the effect before changing settings.

SO THE EX90R'S effects are more variable than those of anything else in the price range, but how about the sound quality? Well, the frequency response is 40-16kHz, and the sampling 12-bit at 39kHz with compression. There should only really be complaints from regular users of AMS and Klark Teknik reverberation units.

More than the sheer specifications, though, the algorithms of the EX90R have been calculated to give full, rich effects which sound to my ears better than anything else short of an SPX90. In the tradition of good audio gear, you're going to have to try it for yourself - words don't do it justice.

IN USE, THE Akai distinguished itself with a whole range of instruments. With drum machines the Small Room is nicely chilly and the Gate settings are sharp, though I could have wished for a faster shortest gate time. Small Hall with a zero decay is wonderfully atmospheric.

Using string keyboard sounds on the Plate setting with the filter closed down gives a suitably impressive Albert Hall ambience, while piano sounds on Loft with a long delay and the filter open are nicely crisp and uncluttered. The great thing I found about the EX90R, though, is that the more I used it, the more different effects I discovered, all from the four basic controls. 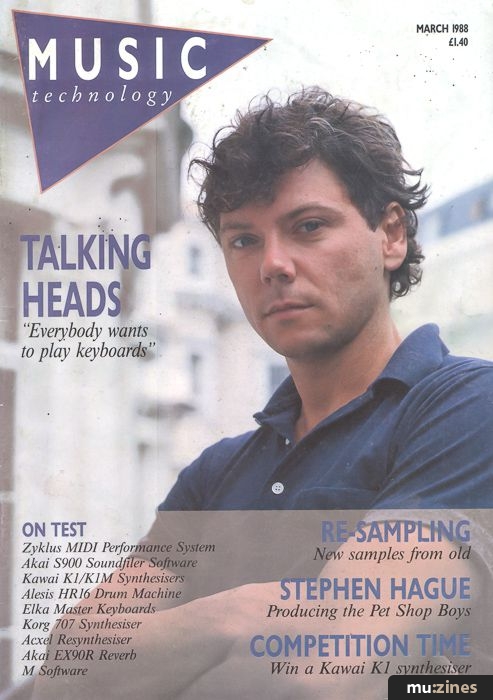