Scales in their various forms, including Major, Minor and Chromatic, and some helpful hints for pedal board players.

When a Scale is formed by a succession of Tones and Semitones according to a set pattern, it is called DIATONIC.

In this Scale the semitone distances will now occur between the second and third degrees, fifth and sixth degrees and seventh and eighth degrees, so the set pattern now reads as Root note, tone, semitone, tone, tone semitone, tone plus semitone, semitone. This formation makes a large step from the sixth to the seventh notes, F natural to G Sharp, but it is necessary in creating the Harmony of A Minor, the reason why this Scale is called 'Harmonic'. The notes are identical in the ascending and descending form as in the Major Scale. See Figure 1.

In the MELODIC Relative Minor Scale, the semitone distances occur between the second and third degrees and the seventh and eighth degrees in the ascending form.

In the descending form, the seventh and eighth notes must be flattened to maintain the sound on pitch particular to this form of Minor Scale. Figure 2.

Compare the two forms of Minor Scales, remembering that in the Melodic form the notes are different when ascending and descending. This scale is also easier to sing and more melodious (hence its name) than the Harmonic Minor Scale.

When the Scale of A Minor is written on the Stave, the sharpened notes are shown by accidentals (#) see Figures 1 and 2, and will not be used as a Key Signature. Therefore, the related C Major and A Minor Scales will show the same key signature with no sharps or flats. 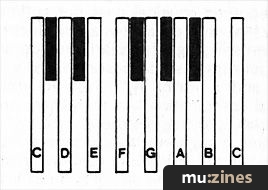 The simple recognition of music written in a Minor Key can be done by examining the beginning and ending Minor chords and the left hand chord progressions. Referring to the Musical Ladder in the June article, it can now be seen that music written in a Minor Key will include left hand chords circling around the Minor keynote, rather than the Major keynote appearing to be indicated by the Major Key Signature. In the arrangement of 'The Green Leaves of Summer', which is written in the key of E Minor with a G Major Key Signature (F Sharp), the left hand chords include Em, B7, Am, F7 and D7 circling around the keynote of E, rather than the keynote of G which was indicated at first glance by the Key Signature:

However, arrangements do not always conform to basic rules and various other chords can be included which do not appear to be relevant but will usually belong to the key.

A WHOLE TONE scale does not include semitones in its formation. See Figure 3(a). While the PENTATONIC Scale has only five notes. See Figure 3(b).

A CHROMATIC Scale is composed entirely of Semitone distances within the octave from the Root. The Chromatic Scale, when written on the stave, will show the accidentals as sharps in the ascending form and flats in the descending form. See Figure 4.

When the eight notes of the Major and Minor Scales are divided into half, each group of four consecutive notes is known as a TETRACHORD. Tetra is Greek for four; Chord for notes (Four notes): CDEF GABC

The Scale formations will now add to your understanding of more advanced left hand chords and the next part of my article will also contain some helpful hints for musicians playing an instrument with a Bass Pedal Board.

To diminish musically means to reduce in terms of intervals between notes. The diminished seventh chord is composed of the Major Chord notes 1-3-5, with the third and fifth notes flattened by a Semitone note i.e. C Diminished Seventh Chord (C-Eb-Gb-A) is in its Root position because of its formation upon the Root note.

A double flat (bb) lowers the sound or pitch of a note by two semitones. When applied to the seventh note of a Scale, it is also in fact the sixth note of scale. The second inversion of the C diminished seventh chord (Gb-A-C-Eb) will position in between the Octave F to F.

The Chord Symbols for these chords will be written as a small circle after the chord name followed by the number seven C°7 or with 'dim' replacing the small circle: Cdim7. Frequently the seven is omitted from the Chord symbol but this is incorrect as a diminished chord with the seventh omitted is in reality a Minor Triad with a flattened fifth note i.e. C-Eb-Gb.

A Triad is a Chord of three notes. The Major Triad, 1-3-5, of the Major Scale becomes a Minor Triad when the third note is flattened, 1-3b-5.

There are only three sets of diminished seventh chords: C°7, G°7 and F°7. Form the latter two sets G°7, G-Bb-Db-E and F°7, F-Ab-B-D in their Root position. There is no need to invert these chords to play them between F and F.

As already established in previous months, the Bass Pedal note actually names the chord being played. Sound the C°7 chord and play the C pedal note. Now continue to sustain the left hand chord while playing in turn each of the other three notes of the chord on the Bass Pedals: Eb-Gb-A. Four left hand chords have now been played and the left hand has not moved an inch because the four pedal notes in turn named the C°7, Eb°7, G°7 and A°7 chords.

Repeat this process with the other two sets of diminished seventh chords by striking each pedal note in turn, while sustaining the left hand chord, and you have added twelve new chords to improve your playing technique!

While Diminished is used to reduce an interval, 'Augmented' is used to increase an interval between notes. The 'Augmented Fifth Chord' simply means that the fifth note of the chord is to be sharpened by a semitone, increasing the interval between the third and fifth notes of a Major Chord. The G Major Chord of G-B-D becomes G-B-D# when note number five is sharpened. The F Major Chord F-A-C becomes F-A-C# and the C Major Chord C-E-G becomes C-E-G#. When creating inversions of a chord, it must be remembered that although the notes change their position on the keyboard, the notes themselves are not altered. Therefore, the first inversion of the C augmented fifth chord is E-G#-C and the second inversion G#-C-E. The Chord Symbol will be written as C aug or C+, and when a seventh is added to the Chord Symbol C+7 or C aug 7, the normal seventh chord is played with the fifth note of G sharpened to G# as before.

The left hand chord of the Suspended Fourth simply indicates that the fourth note of the Scale will replace the third note within the chord, and will be sustained until smoothly being resolved to the third note in the next chord to be played, i.e. the C Suspended Fourth chord C--FG will usually resolve to C-E-G, the normal major chord. These chords will sound restless, although beautiful, and you will hear and feel the need to resolve them. The Chord Symbols will be written as Csus or Csus4. For the Csus7 or C7sus chord, play a normal seventh chord with the fourth note replacing the third note in the chord as before.

These chord formations are really a continuation of my chord structure in a previous month and are still based upon Major Chord formations from the Major Scales, proving that it is not necessary to learn new chords, but simply to adopt the chords we already know and use frequently.