More news of forthcoming new products to tempt you to dig deeper into your pockets.

Yamaha's new G10 MIDI guitar controller made its first public appearance (not counting a plug on Tomorrow's World) at the recent British Music Fair. The G10 design avoids the delayed response problems often associated with guitar controllers by using ultrasound to detect where strings are fretted, rather than attempting pitch-to-MIDI conversion. The G10 and the accompanying G10C 'brain' have no synthesis capabilities of their own, and must therefore be linked to a MIDI expander if you want to hear anything more than the unamplified picking of finger-nail against string. Yamaha modestly suggest a TX802 or TX81Z...

From Yamaha's keyboard division come the YS100 and YS200 synthesizers, yet more recruits to the FM ranks and, unfortunately, not quite as exciting as some pre-BMF rumours had led us to expect. No sign of the rumoured M1 copy. Another time maybe?

Both the styling of these instruments and the absence of the letter 'X' from their names give hints as to their intended 'crossover' market; home keyboard owners looking for something a little more professional, but not too intimidating. Consequently, the programming system is more akin to that of the Korg 707 than Yamaha's previous FM keyboards. Both feature 100 preset and 100 programmable voices, built-in effects (delay and reverb), and the YS200 adds an 8-track sequencer for multitimbral performance.

Also shown at the BMF was the follow-up to the DMP7 Digital Mixing Processor, the rack-mount DMP11 (£1499 inc VAT), which is essentially a cut-down version of its predecessor with fewer onboard signal processors.

Good news for users of the Commander Electronics' Atari-based Lynex sampling system is that it can now read Akai S900 samples direct from disks inserted into the Atari's disk drive. This opens up access to one of the largest sample libraries around, and makes the system a still more interesting product.

Apple Macintosh owners will soon be able to benefit from Lynex's powerful facilities too, as a Macintosh version is expected soon.

A couple of new products from Cheetah may be just the thing for fans of classic analogue synth sounds, or indeed anyone in search of new gear at rock-bottom prices.

The first is the MS6, a 6-voice polyphonic, multitimbral, dual oscillator per voice analogue synth module (£299.95 inc VAT). The MS6 holds 320 editable sounds in ROM, with a further 96 user programmable RAM sounds, all of which may be arranged into 64 performance memories to create keyboard layers and splits.

Also in the pipeline is the MS800 (described by someone at the BMF as a 'PPG for under £200'). This synth expander module uses four sampled wave oscillators per voice as the basis of its synthesis method. 256 presets and 64 user programs may be arranged into 64 performance memories, and all this can be yours for just £199.95 inc VAT.

Should you require a sequencer, for another £199.95 the Cheetah people will be more than willing to supply you with an MQ8 MIDI Sequencer/Performance System. Besides operating as a conventional 8-track, 16-song, 256-pattern sequencer, in performance mode the MQ8 allows chained sequences to be altered in real-time by eight effects, including Embellish, Vector Chord, Echo and Arpeggio. In performance, sequences are arranged in sets of up to eight per part, with 10 parts per step and 22 steps per song. 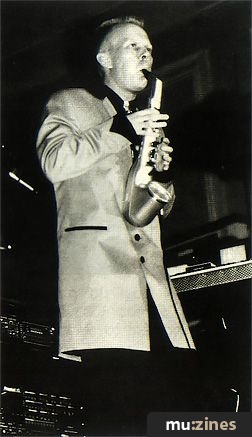 From Elka comes the CR99 MIDI Disk Recorder, which will record all normally recognised System Exclusive MIDI data directly on to floppy disk. Besides simply recording performances, the unit may also be used to store voice data, rhythm patterns from drum machines with limited internal memories, etc, provided they can transmit and receive Sys Ex dumps. When recording songs, the unit has an 80,000 event memory, and up to 99 songs may be recorded.

The idea of controlling MIDI devices from something other than a conventional keyboard is not new; guitarists, drummers and more recently saxophonists have had the avenues of MIDI control opened to them. Now it's the turn of anyone who can sing or whistle down a microphone.

The particular mic in question is the Digigram MIDImic, distributed by Farfisa, which will accept any pitched input (vocal, trumpet, flute etc) in the range E0 to C5 and convert it to MIDI data, as well as providing a regular audio output. Whilst pitch-to-MIDI convertors have been around in some form for a while, this is the first to be packaged in a microphone body without any outboard electronics. 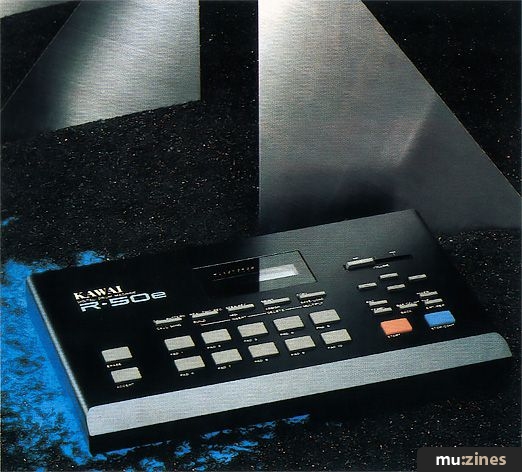 A 19" rack-mount version of the Kawai K1 synthesizer, the K1R, is now available. The K1R is identical to both the K1 and desktop K1M expander in terms of its synthesis capabilities, though it omits the joystick controller featured on both those units. No price details are available yet.

Also new is the R50E drum machine, identical to the R50 but with a new set of onboard sounds. In fact, those on the CP2 sound chip, which include such goodies as 'Purple' Rim Shot, Funk Bass Guitar, and the oft-heard Orchestra Hit.

Finally, to ease routing headaches, there is the MAV8 - a low cost, rack-mounting 4-in, 8-out MIDI patchbay. 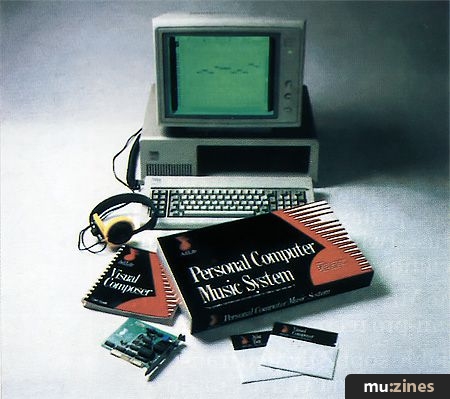 The Ad Lib Personal Computer Music System, for PC AT or XT compatibles, is a new product from Blue Point based around a plug-in FM synth board. The half-size board is 11-note polyphonic, multitimbral, and offers both instrumental and percussive sounds. The Visual Composer software that comes with the board allows the creation of compositions using either six melodic and five percussive parts or nine melodic parts, with note entry via cursor keys, mouse or MIDI keyboard (provided a suitable interface is connected). Further software is available to create your own FM sounds, and combine music and graphics.

• DR.T From Dr.T comes the KCS Level II sequencer (£275) for the Macintosh, an ST version of Fingers (£79.95) and, also for the ST, the Phantom SMPTE program, which loads into your computer with a sequencer, and will read and write SMPTE/MTC via the Atari's serial port. Also coming soon is Sample Maker, a generic sample editing program which includes a 60 operator FM, AM additive synthesis module (£199).

Dr.T's Copyist scoring program is now available in new versions for the Atari, PC, and soon the Amiga; both Level I (£79.95) and Level II (£299.95) support standard MIDI files, and may be held in memory as an MPE module. New Dr.T editors available for the Atari, Mac, Amiga and PC, include those for the Roland D110, Kawai K1, Matrix 1000 (all £99) and Kawai K5 (£120). On the K5 software front, JCD MIDIsoft has just released an S900-to-K5 conversion program which translates any S900 sample into harmonics on the K5, thus performing a kind of resynthesis.

• PASSPORT have just announced Version 3.0 of Master Tracks Pro for PC compatibles, Macs and STs, which can now sync directly to SMPTE via MIDI Time Code. SMPTE hit points may be programmed, the software automatically adjusting tempo to accommodate these marker points. Encore is a scoring package that may be used in conjunction with Master Tracks Pro that supports 64 multiple parts and standard MIDI files. Music can be entered in real or step time, and playback over 32 MIDI channels is possible. Another new Passport product for the Mac is NoteWriter, a music notation program featuring an extremely fast and versatile set of tools for entering and editing musical symbols.

• INTELLIGENT MUSIC have now released 'M' for the Amiga, plus MIDI Draw (ST) and Riff (Mac), both of which interpret your computer artwork as music, transmitted over MIDI. Also available is Cartographer (£79.95) for the Atari, a graphic editor for the Axxess MIDI Mapper.

• MCMXCIX's product range has been further extended by their appointment as exclusive UK distributors for several more manufacturers, including Coda, who produce the Mac-based Finale scoring software. Pandora are a new UK software house supplying a range of editors (currently only for the ST) which run as desk accessories on GEM-based sequencers. All programs in the range-currently covering the DX7, D50, D110, Korg M1 and Kawai K1 - cost £79.95 each. Also now available through MCMXCIX is the Soundquest range of PC and Amiga based editors.

• EVENLODE SOUNDWORKS New software available through Evenlode Soundworks includes the Steinberg Synthworks K1 editor, and version 1.1 of Masterscore. From Digidesign comes the Atari version of their Universal Sound Designer (£315 inc VAT), a sample editing program which is compatible with almost any 8 or 16-bit sampler. Another Digidesign product of interest is the Turbosynth, a Mac-based modular sound processing/creation program enabling the user to both manipulate existing samples and generate complex timbres from scratch.

• C-LAB Users of the C-Lab Notator and Creator programs may want to get their hands on the new integrated SMPTE/MIDI Synchroniser and MIDI Expansion System (£349), which allows the C-Lab software to be locked up to SMPTE or EBU timecode. Also coming soon from C-Lab will be their MT32 and Oberheim Matrix 1000/6/6R editors.

• SOUNDBITS A K1 Editor-Librarian is now available from Soundbits Software UK. Running on an Atari 520, 1040 or Mega ST, the K1 Voice Master ST (£75) includes a randomise function which automatically generates new Single patches. A facility is also on hand to specify which parameters are to be randomised. 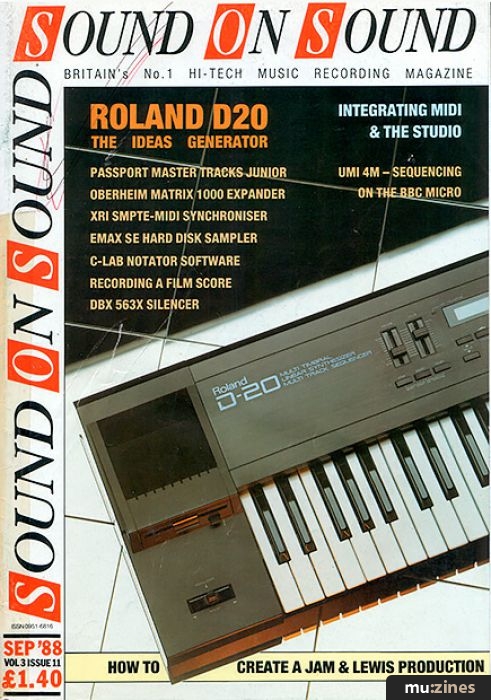