The beat goes on: this month Nigel Lord's essential drum programming series takes him into the deep south of the African continent, and into deep rhythm.

In the second part of this study of programming African rhythms, we're headed south towards Zimbabwe and South Africa itself - bring your beatbox and come along.

CONTINUING OUR INVESTIGATION of African rhythm from a couple of months ago, we find ourselves moving south to the states of Zimbabwe and South Africa. Here, thanks to the influence of Western pop culture, there is a much wider use of conventional percussion voices in the music currently attracting international attention. ("Conventional", that is, from a Western perspective.) This situation has come about through the adoption of the standard acoustic drum kit by many southern African percussionists (a result, presumably, of its convenience for the working musician) who in recent years have adapted many traditional rhythms into a form suitable for the snare, bass drum and hi-hat.

Needless to say, from our point of view, this makes life a lot easier. Unlike the rhythm of the North African states used as inspiration for the last On the Beat article, it should be possible for us to create patterns with an authentic African flavour, without having to "modify" the sounds of an ordinary beatbox. And certainly, if the popularity of bands like The Bhundu Boys and The Four Brothers is anything to go by, African rhythm played on a conventional drum kit is quite acceptable to the public at large - even if this does involve some dilution of its original form.

In this sense, it's perhaps somewhat paradoxical that the further one descends through the countries of Africa (and, by implication, the further one is removed geographically from European and US influence), the more closely the rhythmic form begins to resemble that of Western music. Thanks to the sorry history of British colonialism, this is indeed the case. It has to be said that, from a cultural standpoint, we are in many ways the richer for it. Indeed, the more accessible music of the southern states has provided a "way in" to African music for many people in recent years, and purely as an influence on Western pop culture it has been one of the few rays of light in an increasingly stagnant market.

Despite the more straightforward instrumentation involved, I've opted once again for a fairly eclectic approach to selecting examples for this month's article - in much the same way as for last month's. In other words, these patterns are intended to reflect the rhythmic feel of southern African music rather than provide examples of specific rhythms. As such, they serve more as an introduction to the subject than an advanced lesson - though given the complexity of patterns I could have drawn on for inclusion, this is perhaps no bad thing.

Throughout, you'll find examples of techniques used consistently in rhythms of the region, and it's on these that I have relied to provide each pattern with a flavour which is unmistakably that of southern Africa. Amongst them are four-to-the-bar bass drum parts, repetitive, off-beat hi-hat/shaker patterns and the use of the snare drum as a means of accenting a particular beat rather than providing a steady rhythmic pulse (as in Western music). Listen closely, and you'll probably hear the origins of reggae in a number of these examples, and in Pattern 6, you'll almost certainly detect a "military" influence - which is quite common in music throughout central and southern Africa (...another legacy of colonial rule).

To produce complete rhythm tracks you will need to blend these patterns with instruments which preserve the ethnic feel of the music (unless you're engaged in a crossover project of some kind). Happily, with the proliferation of voices offering a very creditable imitation of instruments such as the marimba and mbira (the African thumb piano) available on most FM synths, this shouldn't prove to be much of a problem.

To facilitate their use in a wide variety of contexts, I have again tailored each rhythm to fit into a neat 4/4 pattern, though in a couple of examples, you'll probably notice three-based rhythmic parts resolving themselves over the four bars of the pattern's duration. Needless to say, you'll need to take this into consideration if you're planning to write complete rhythm tracks using any of my examples where this occurs.

As for the instruments themselves, they are, as I said, quite conventional, with most of the patterns built round the hi-hat, bass and snare drum. A little care, however, should be exercised in the selection of the other instruments. The shaker, for example, can be provided by any suitable instrument - from the cabasa to the maracas - but this should be fairly low-pitched, so be prepared for a little detuning. And the same is true of the side stick, which in these examples is cast more in the role of a wood block. The open conga voices do not necessarily have to be produced using that particular instrument, but where an ordinary drum (such as a tom tom) is used, try to opt for a more mellow, "musical" sound with a definite pitch and the instruments tuned about three semitones apart.

Though I personally wouldn't recommend it, the bongos are also interchangeable with tom voices, but here, a much drier, high-pitched sound should be sought with a greater pitch interval between the two instruments. As in all programming, try to select voices which are complementary to one another and tune them so that each has its own space in the frequency spectrum. In certain cases, you'll also need to adjust your tuning to that of the accompanying music (or vice versa) - a fact which is often overlooked when first making the crossover from purely rhythm voices to those which have a pitch component too.

After some 20 instalments of this series, I can envisage no real programming problems with this month's offerings. As usual, the four dynamic levels (from low to high) are represented by open, lightly-shaded, heavily-shaded and solid diamonds, and beats to the bar are divided into eight (or six in the case of triplet rhythms) for clarity. Flams are indicated by a letter "F" inside the relevant beats, and triplet rhythms are marked with a letter "T" just after the time signature.

Of this month's patterns, only Pattern 5 is a true triplet rhythm; Pattern 6 is simply notated on a triplet grid to facilitate programming the triplet notes of the hi bongo in bar three. If your machine can cope with triplet programming of individual instruments, by all means program the rest of the instruments in straight 4/4. Finally, make sure you choose a fairly short duration voice for the snare in Pattern 6. As mentioned earlier, the pattern has a distinct military feel to it, thanks largely to the "parade ground" snare figures which rely on the instrument having a short, tight voice. An African rhythm with a military beat? Now that's what you call crossover... 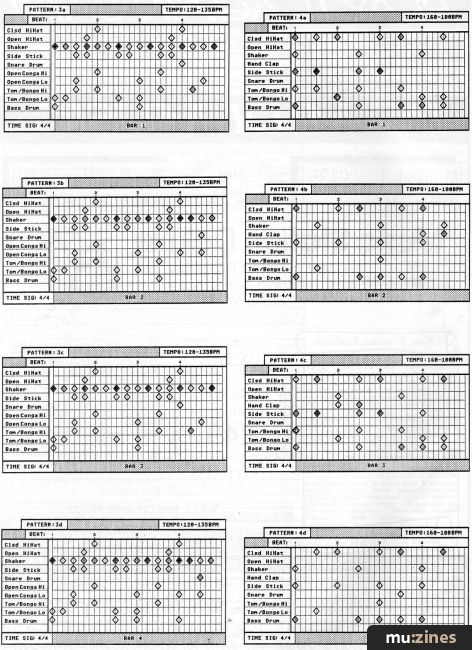 Read the next part in this series:
On The Beat (Part 21)